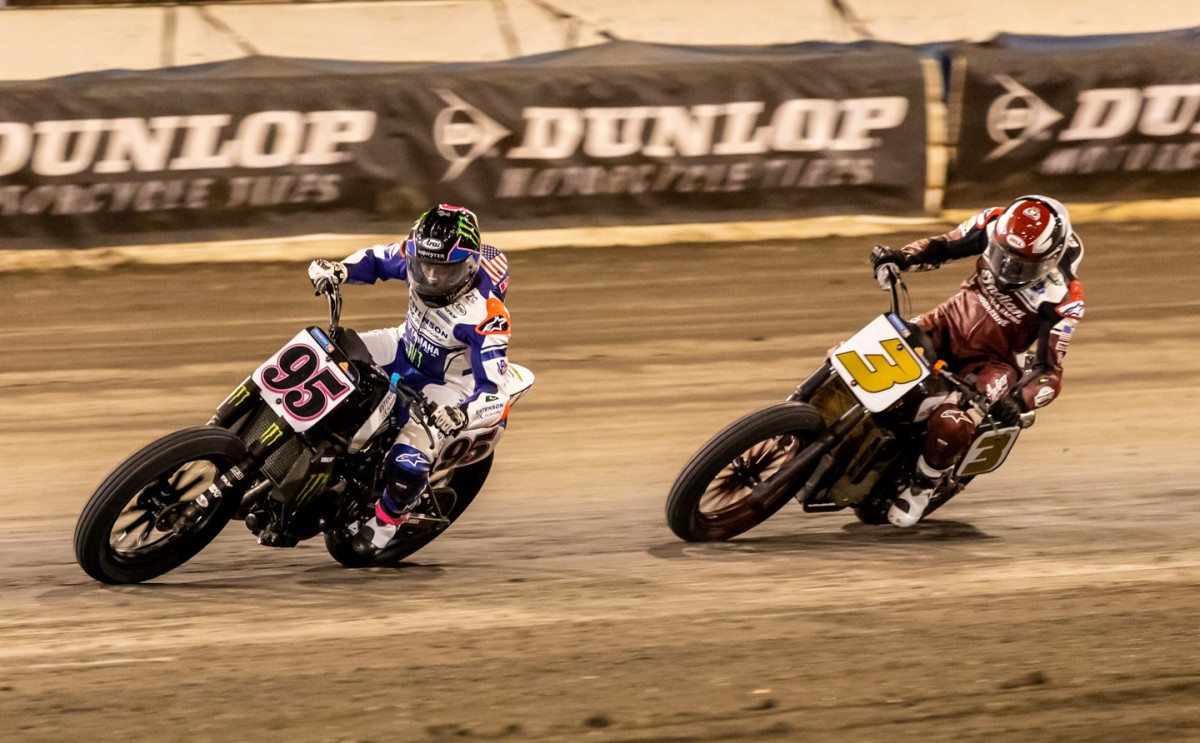 If this were any previous Progressive American Flat Track season, JD Beach and the Estenson Racing Yamaha team behind him would probably be doing the best they could while knowing they had an ace up their sleeve in the form of the series' return to Castle Rock, Washington, this August.

Over the past few seasons, the mult-time national champion roadracer has proven himself to be the preeminent force in Mission SuperTwins presented by S&S Cycle compeition when things go right (and left). Beach has been victorious at four of the last five premier-class TTs dating back to 2019. And the Castle Rock TT is not just another opportunity to showcase his versatile skills, it’s the track he grew up racing on, located just a couple hours drive down Interstate 5 from his boyhood home.

But this isn’t any previous Progressive AFT season. True, Beach is likely to go into Castle Rock viewed as a heavy favorite, but he has more immediate concerns to deal with now.

At the top of that list is what he considers his true ‘home’ race: the Mission Red Mile doubleheader presented by Indian Motorcycle of Lexington.

While a native of Washington, Beach relocated to the Owensboro, Kentucky, area more than half his life ago. The Estenson Racing operation followed suit a couple years back, transplanting from just outside of Phoenix, Arizona, to Owensboro proper. Throw in the fact that the Red Mile is the closest thing Yamaha has to a home race after moving its USA Headquarters from Cypress, California, to the Atlanta, Georgia, area, and you’ve got a lot of collective motivation to come up big at the season’s first pair of Miles on Memorial Day weekend.

JD and his heralded rookie teammate, Dallas Daniels, have come out swinging in 2022, combining for three podiums and six top fives in the season’s opening three races. That’s a massive uptick in performance considering the team had tallied up just two podiums and eight top fives on ovals since Beach first joined the effort in 2019. 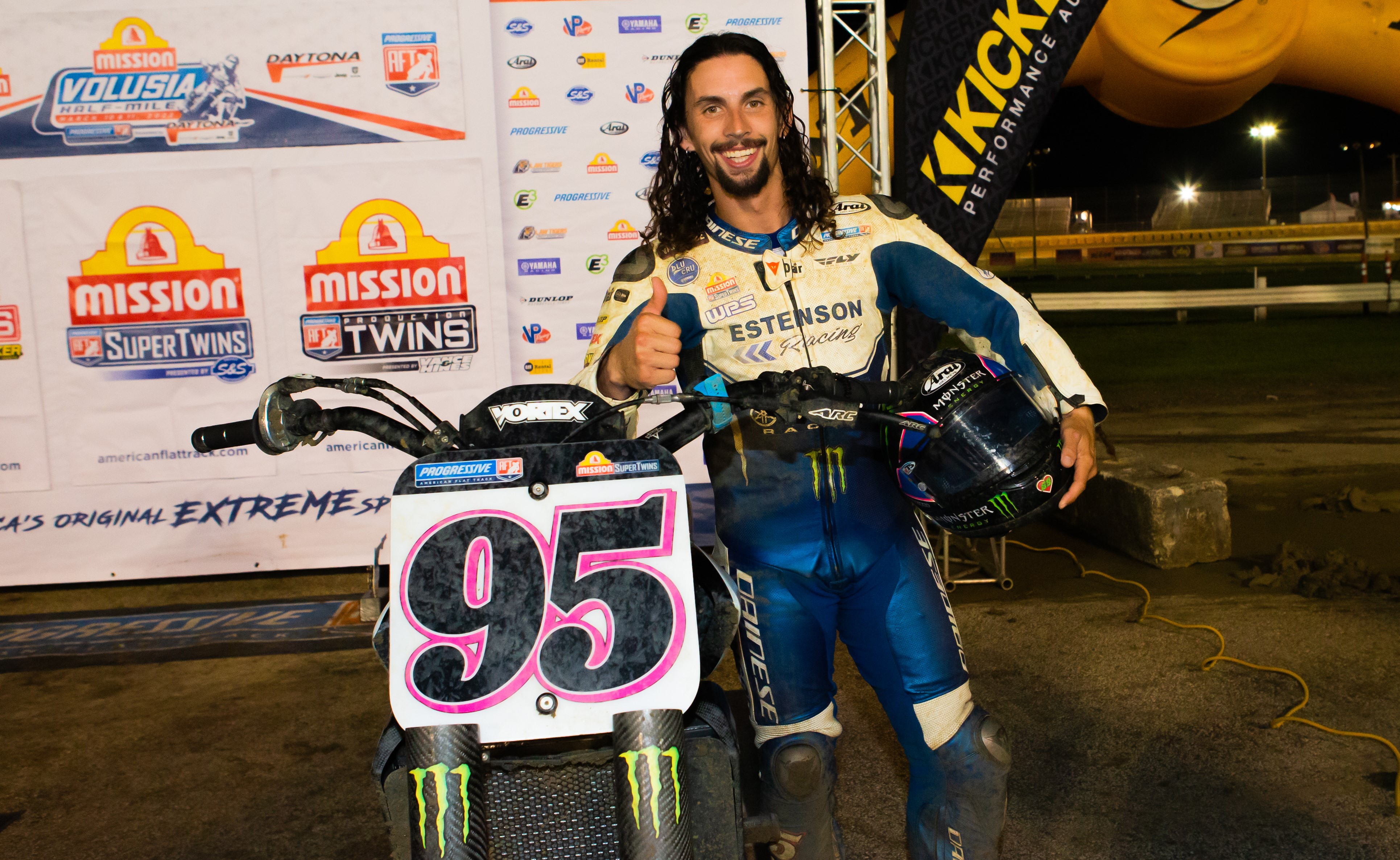 While those gains come alongside the introduction of new regulations intended to level the playing field, Beach says the improvements start with the work his squad has done to its continually developing MT-07 DT racebikes.

“The team has done an unbelievable job,” Beach said. “They haven't stopped working. The stuff that they've done to the motor to improve that and make it react more like a V-Twin. We have a whole new frame and that has helped a ton. Also, they understand that me and Dallas aren't the same rider. He's taller, so they've made each bike suit us, the way the seat is and the way the tank is. That really helps me ride a lot better.”

And exactly how do the balancing efforts to bring the field closer to the all-conquering Indian FTR750s factor into the equation? Beach said, “I know there's been a big stink about the restrictors, but I feel like our bike improved a lot. It's made it to where the strengths of our bikes can be better than the weaknesses of the Indian. So areas where our bike is good, you can actually tell it's good. And areas where the Indian is good, you can tell that it's still good.”

Asked to elaborate, he explained, “Our bike is good when we kind of get slowed down in the middle of the turn and have to drive off and build speed. But the Indian is still really good once you get rolling.

“Like at a track like in Texas, we kind of get slowed down in the middle of the turn, and I felt like I was stronger than anyone there, other than Jared Mees because he was going really good.

“But at a track like Missouri, where there was pretty good grip and you could keep rolling, those bikes seemed like they could carry their speed better.”

That tangible early-season success has generated expectations for even more after getting burned by optimism in the past. “The last few years, we've had new stuff that we've tested, and we always felt like we had something for them coming into the season. And then we'd start the year and we'd be eighth again.

“This winter, when we were testing, the bike felt really good, and we were getting excited again. But we were all like, 'We can't get our hopes up. Let's see what happens.'

“And then we go to Volusia, and we get third. Okay, that's good, but we've got to keep our heads down and keep working. And then we go to Texas, and we get second and Dallas gets third. And that was on a track where, in the past, no way would we have done well there. Now we're expecting to be up there.

“So when we get a fifth at Missouri... Last year we would have been over the moon with fifth, and this year we were so bummed about it.

“It has swung a little bit, but we know there's still work we have to do.” 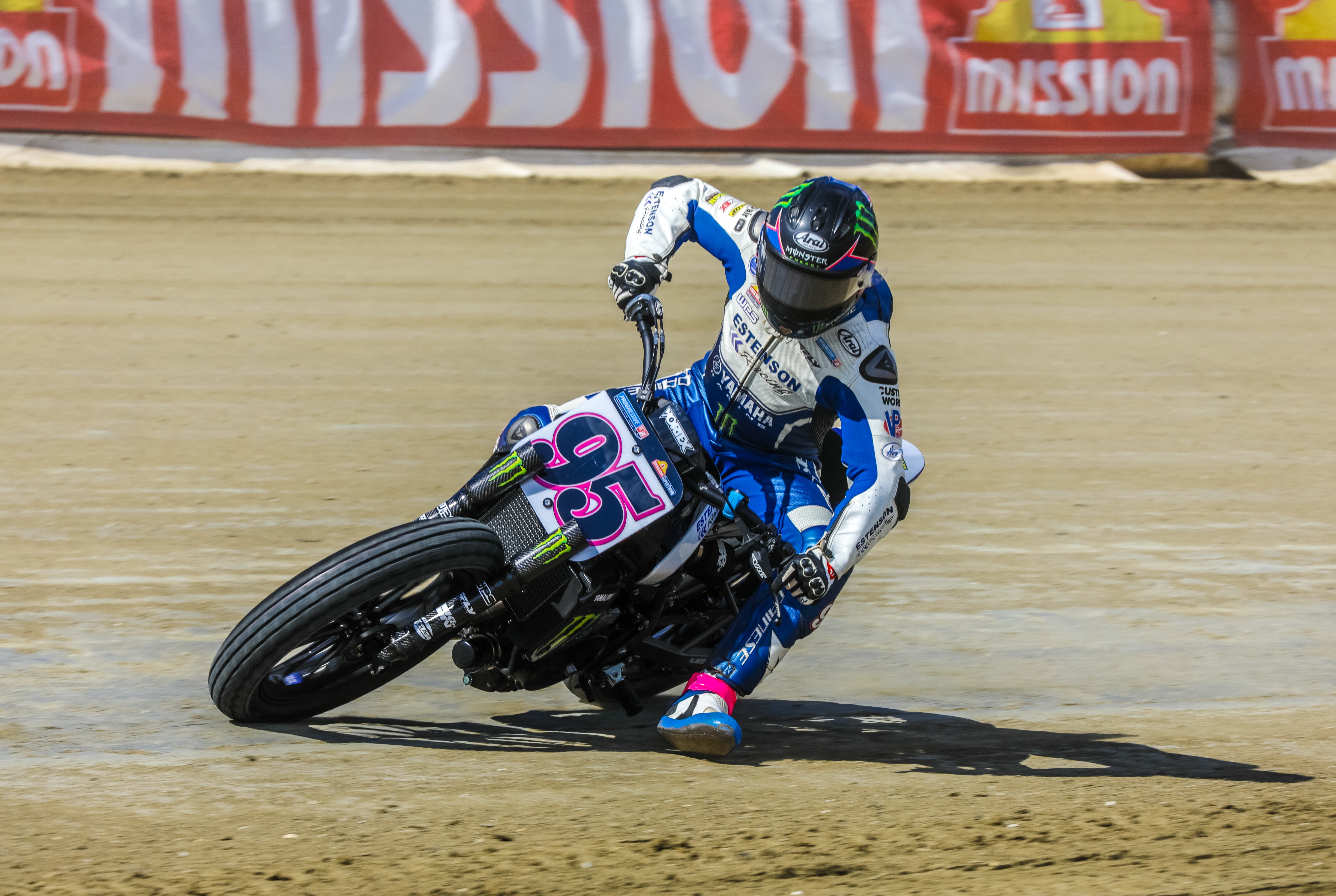 That work continues at the Red Mile, which was circled by many in the paddock prior to the start of the season. Some have suggested that the rule changes could have their greatest impact when the bikes are running wide open on a big Mile. While Beach feels as if he has a legitimate chance to score a home win, he doesn’t go in with the expectations of enjoying any particular advantage. Rather, he gets the sense that a war is coming to Lexington.

“I’m really looking forward to it. I know that everyone is saying that the real test for the restrictors is going to be the Mile, but from my experience, the guys that I'm racing, I don't think their bikes have slowed down too much. And we still struggle with mid-straightaway speed; not that their bikes are a lot faster, but they're hooked up and they're going.

“So I feel like, for the fans, for my team, for the Indians, for Bronson (Bauman) on the XG – we're all going to be up there, and we're going to have a race. And that's what we all need. We don't need to be sitting single file with the Indians winning. I feel like this Mile will be a really good race.”

If Beach does manage to stand atop the podium at the Red Mile – or at any oval for that matter – it would be an achievement no premier-class rider has accomplished on a Yamaha twin since Kenny Roberts did so nearly a half-century ago.

Pulling off such a feat would be of great personal importance to Beach, but perhaps prove even more meaningful to Tim Estenson and the Estenson Racing outfit as a whole.

“I think if or when that does come, it's going to be really cool for me. Now that I'm riding dirt track full time, getting that Grand Slam is something I really want to do. 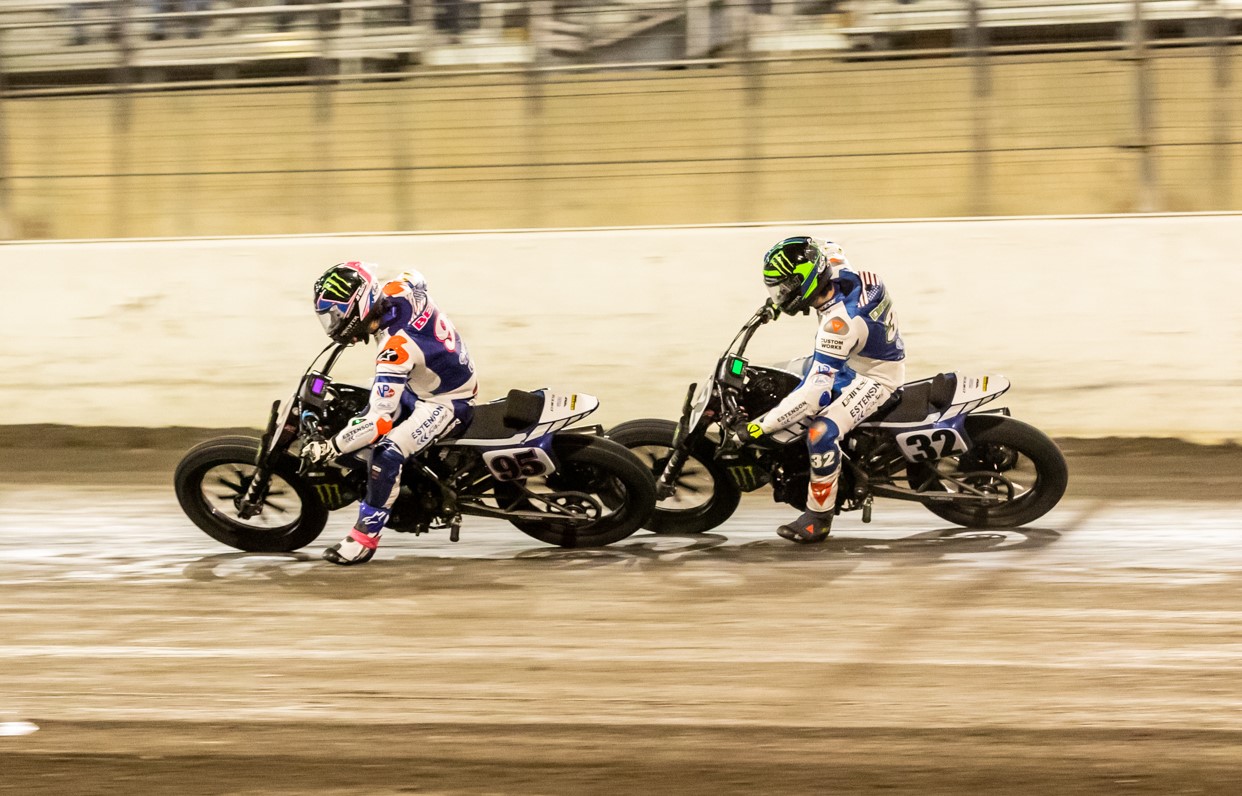 Of course, even if the team seems locked on a winning trajectory, there’s no guarantee JD will get their first. The highly decorated Daniels has had an immediate impact at the sport’s highest level, scoring a third and two fourths in his first three races in the Mission SuperTwins class after claiming back-to-back Parts Unlimited AFT Singles presented by KICKER titles. There’s no reason to expect him to do anything but get stronger going forward.

The emergence of a uniquely talented teammate could be threatening, but JD prefers to consider it an opportunity. He said, “Personally for me, it's been great. He's a super good kid, and he works really hard. He's very smart already, but he wants to learn. It's been cool for me, because he looks up to me like I looked up to Nicky (Hayden). It's been fun to help him.

“For me, I feel like if I was trying to be secretive and not help him, he’s still going to get better. But if I can ride with him and help him, it's just going to help me too. The more I can help him go faster, it’s going to make our bikes better, and it's going to help me go faster. So I think it's good to have him on the team.”

Even while embracing the mentor role, Beach remains firmly focused on all that he intends to accomplish personally before he’s done.

“In the short term, I want to win some ovals, get the Grand Slam, and keep chipping away at it. Beyond that, I still have a dream to win a Superbike title. But I feel like I still have time for that, and that's not my main goal right now. My main goal is to win the Mission SuperTwins title.”

That's a lofty goal, but one not out of reach, even as early as this season. And it's a goal that would be a lot easier to envision from the top step of the podium at the Red Mile. 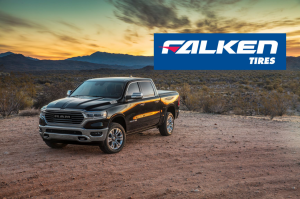