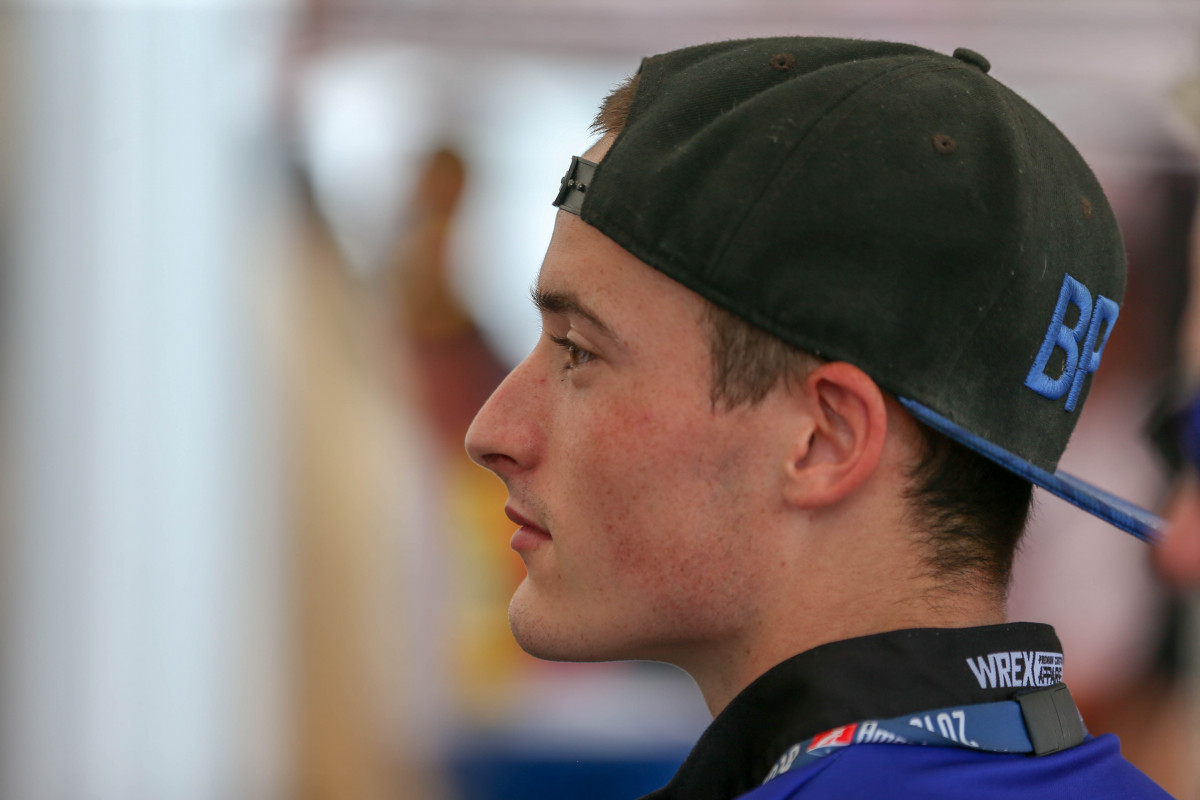 DAYTONA BEACH, Fla. (July 30, 2018) – It’s been 65 days since Brandon Price – who was leading the AFT Singles points chase – crashed badly at the Springfield TT, knocking himself cold, breaking his scapula, bruising his lungs and severely lacerating his liver. As he was being loaded into the ambulance after many tense minutes of being worked on by paramedics, folks on the ground remember looking at the unconscious Price and thinking, “This isn’t good. He’s in bad shape.”

He was. Aside from the lung, scapula and liver injuries, doctors thought he might have serious head trauma, and drilled a hole in his skull to relieve any pressure buildup from excessive bleeding. Indeed, Price had suffered a subdural hematoma (or subdural hemorrhage), which is medical-ese for bleeding in the brain. But that bleeding, thankfully, wasn’t as bad as it could have been, and as he regained consciousness a day or two later, attention slowly turned to his other injuries – which were serious but not life-changing or -threatening.

Amazingly, Brandon Price will make his AFT comeback early next week at the Buffalo Chip TT (on Sunday August 5th) and Black Hills Half-Mile (on Tuesday August 7th). The Maryland rider is nothing if not tough as nails. We caught up with him on Monday before Sturgis to talk about his injuries, his recuperation, his attitude on rebounding so quickly and his take on the 2018 season. 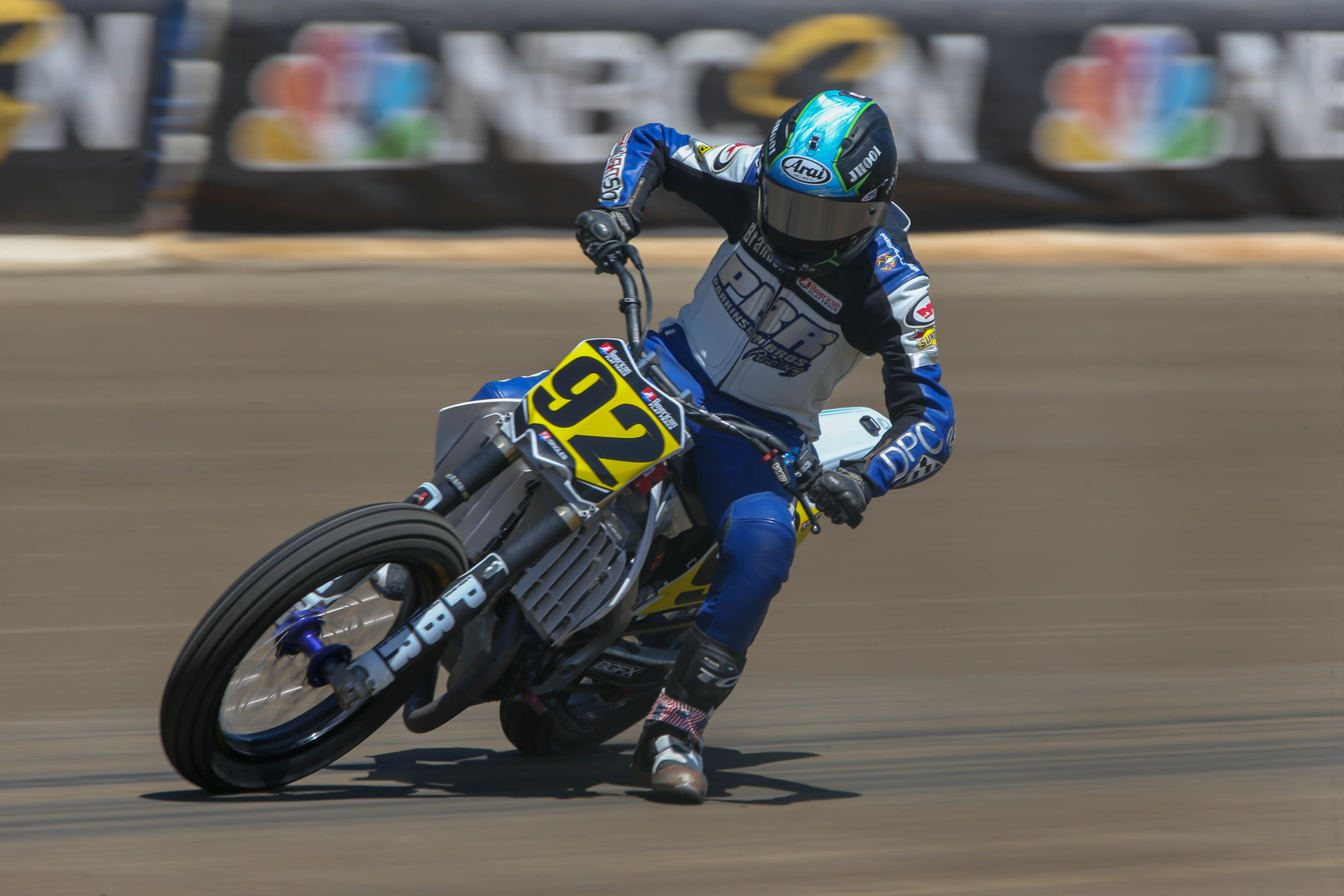 BP92, showing the form that earned him the points lead heading into the Springfield TT in May.

First off, how are you feeling now? I feel good. Great, really. I’ve been riding, and even racing locally a little. So I’m not really rusty. I feel like my old self. 100 percent, actually. Which is a little surprising, because for a while I couldn’t do a thing. Couldn’t even walk up a set of stairs! The liver ended up being the worst thing. I couldn’t lift anything over 5 pounds. But once I started doing physical therapy, things improved. The concussion wasn’t bad at all, but the internal injuries were.

So you’re excited about getting back to AFT Nationals this weekend?

Extremely! Can’t wait to get out there. It’s been way too long. Been itching to get back for a while now. 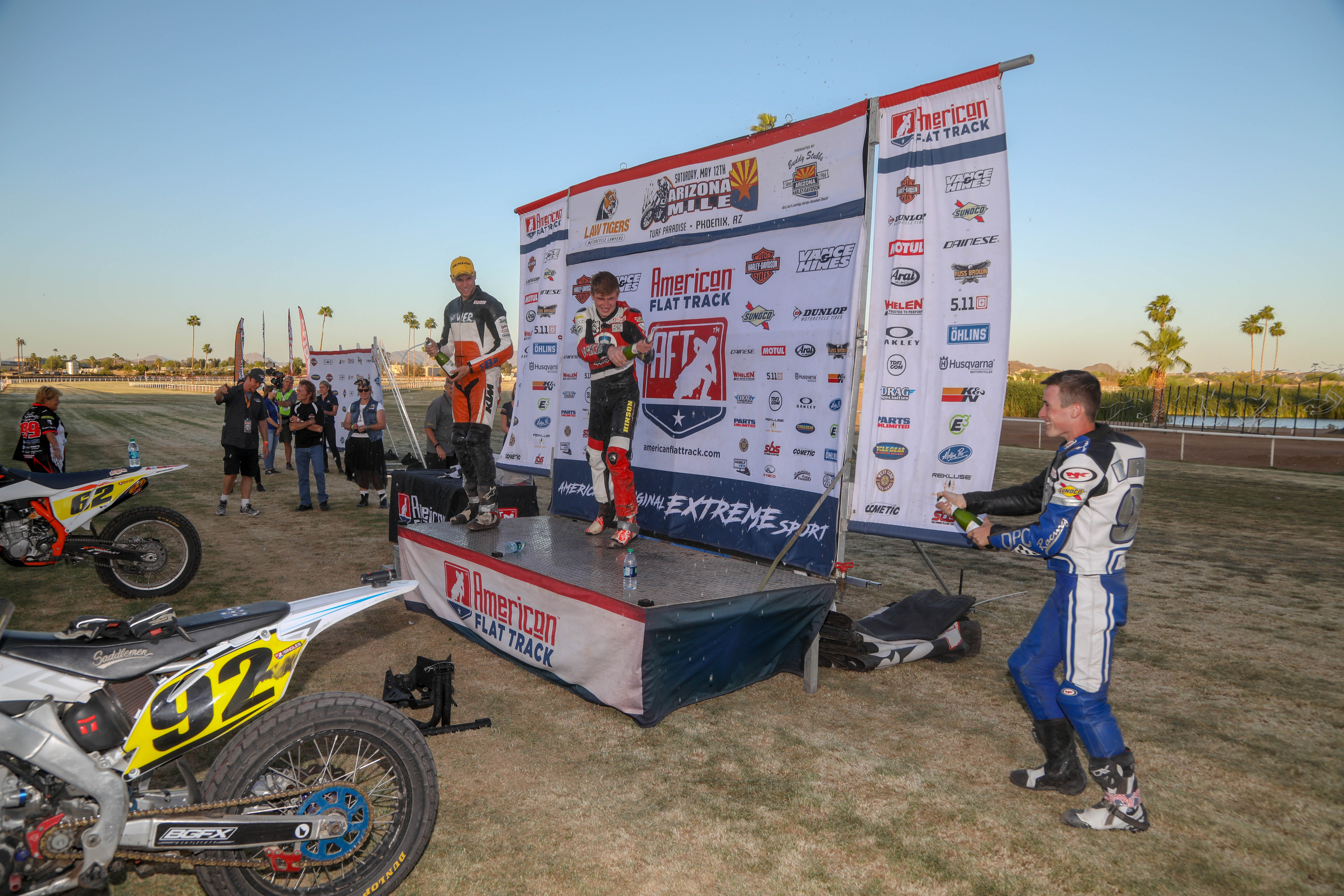 Podium goofing with winner Kevin Stollings and runner-up Dan Bromley at Turf Paradise in early May.

What do you remember, if anything, about the Springfield crash?

I remember things right up until the crash. Someone in front of me got a little sideways going off the jump, and after we launched I landed on his back fender, which slammed me into the ground. And I think a couple of guys hit me as I was tumbling. After that, nothing until a day or two later in the hospital. A couple of the riders came by, and my parents were there. I was signed up to ride in AFT Twins the next day, and I remember thinking, sort of in a panic, ‘I gotta get back to the track to ride that twin!’ Pretty funny.

What were doctors telling you early on?

They were saying I’d probably never race again. I honestly think they thought my head injuries were worse than they ended up being. I just kept my head on straight and didn’t listen. I did my PT and kept looking ahead. [The docs] were definitely surprised about my progress. My parents were, too.

When you got hurt you were leading the AFT Singles points, with a win in Atlanta and four podiums. Obviously, things were working.

They were. And really well. But mainly it’s been my aggression level. I’ve really stepped it up. When I lost out on the title last year [Price ended up second to Kolby Carlile -ed.] I told myself during the off-season that I’d be more aggressive and not let any opportunities slide by. I just needed to be better, make the most of it. And I have, at least before the crash. My bike and sponsors are pretty much the same, and everything works pretty well, so it’s mostly just me being more determined and aggressive. 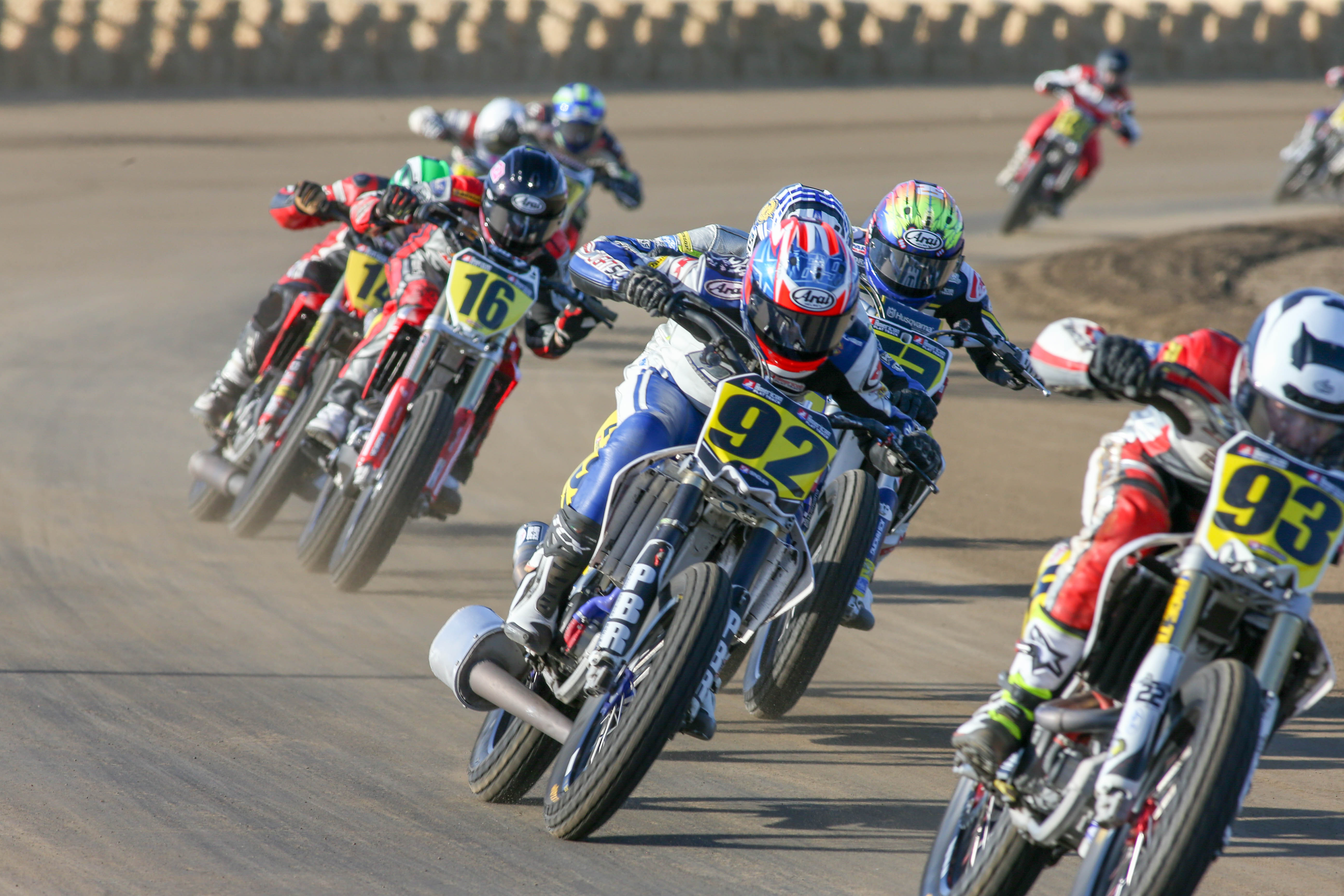 From the sidelines, Price got a different perspective on how close the competition is in AFT Singles.

You’ve been a spectator these last couple of months. What have you noticed about Singles class? Or the Twins class?

Well, mostly that a lot of riders in the Singles division are at about the same speed. The top ten or so are all really close, and that wasn’t as obvious as a rider. The Singles riders are running really close to each other in large groups, going into corners three wide… it’s all really exciting to watch. Dan [Bromley] is always good, and watching Shayna [Texter] win at Lima was really cool. That was such a gnarly track, and you could see she was the only one twisting it everywhere. That was the difference there, I think. In Twins, it’s crazy what Jared [Mees] is doing. And Henry [Wiles] has been so consistent on that Indian. And Carver…always fast. It’s been fun to watch. 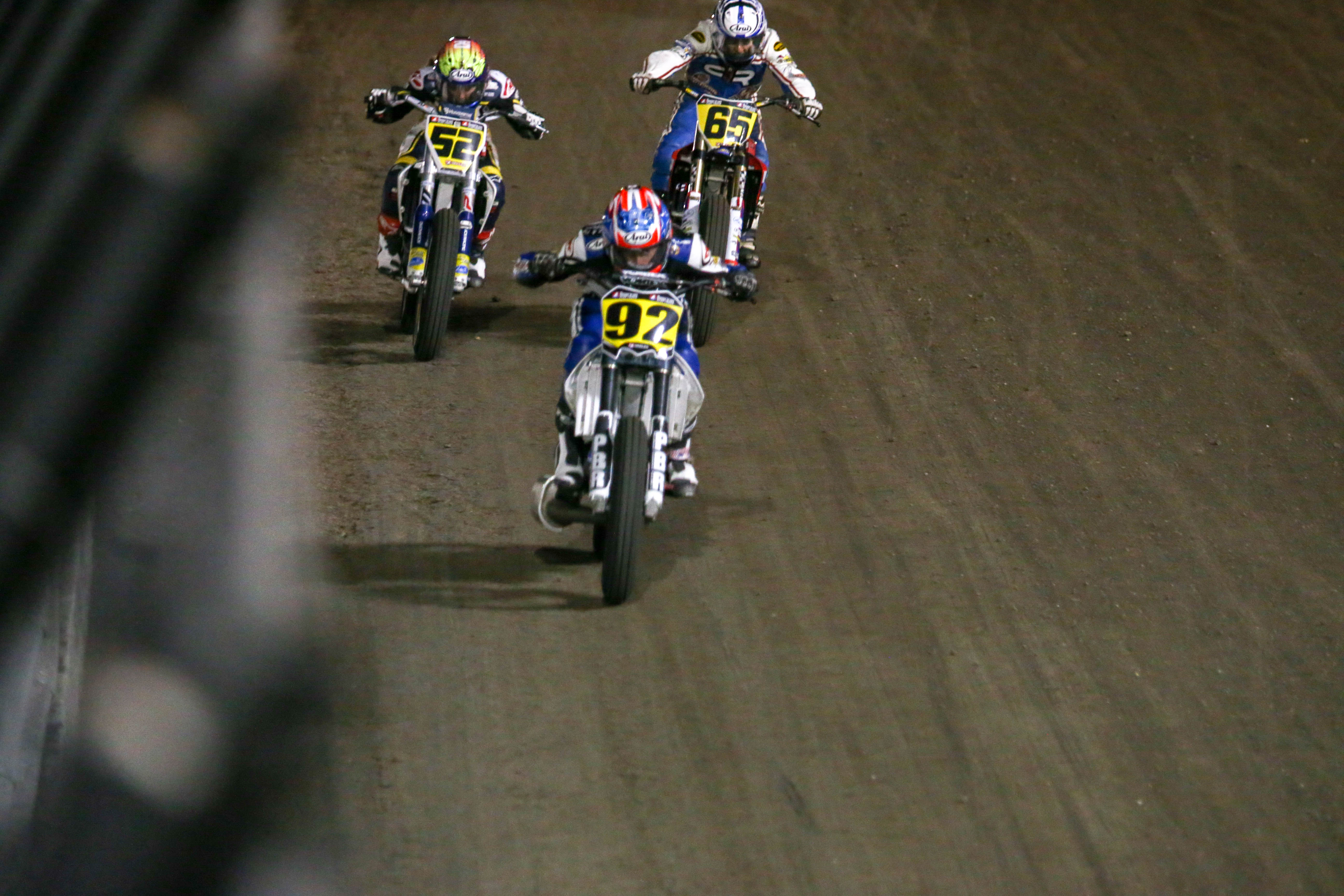 Talk about the Buffalo Chip TT. You were 10th there last year.

It’s a really fun track. A right-hander around the bar, the big jump, the fans right up against the track, and them being really loud… it’s a lot of fun. I screwed up a lot on the jump last year, but during the off-season I did a lot of motocross training, so I’m hoping to be better there this year. It’s definitely one of the coolest venues. 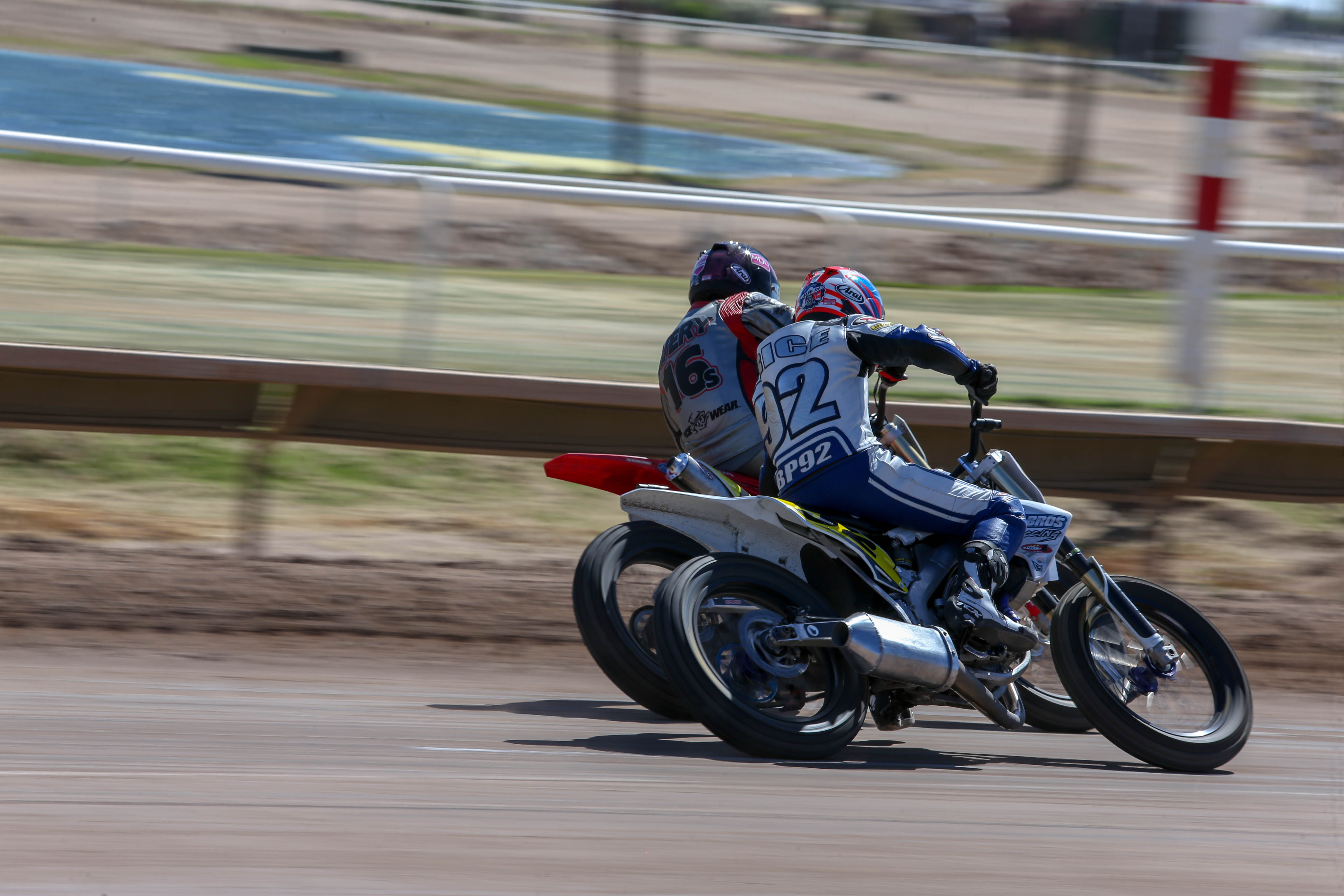 Price dueling with Tristen Avery at this year's Phoenix round in May.

Last year you won at Black Hills. How’s your confidence there?

It’s a clay oval, which I enjoy and am pretty good at, so I’m really comfortable there and feeling reasonably confident. It’s a little tricky, though; you have to sorta weave back and forth from grippy area to grippy area, and know where they are. But I’m pretty confident there. Should be a good one for us. 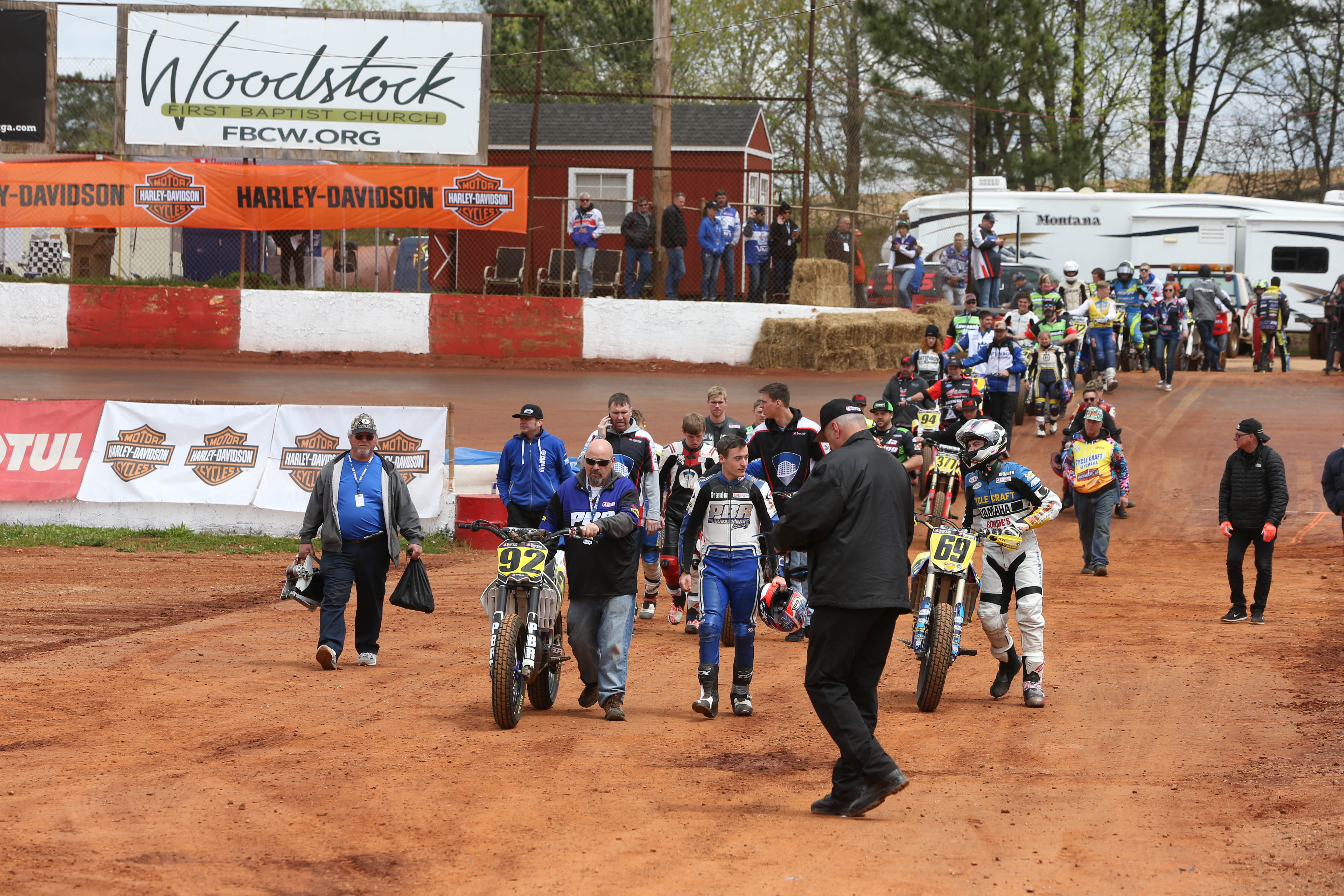 Price is looking forward to the Black Hills Half-Mile, a clay oval with a surface not unlike that of Dixie Speedway, where he won earlier this year.

Any other venue you’re looking forward to?

My motocross training will hopefully come in handy at Peoria. I crashed pretty hard there as a rookie in 2016, but I’m better now. It’s a cool place, and so much history. I’ve been riding the Springfield Short Track forever, so it’s comfortable for me. And I like Williams Grove, too. I had pole last year, but got a bad start, I think. It’s rough, but I don’t mind that. 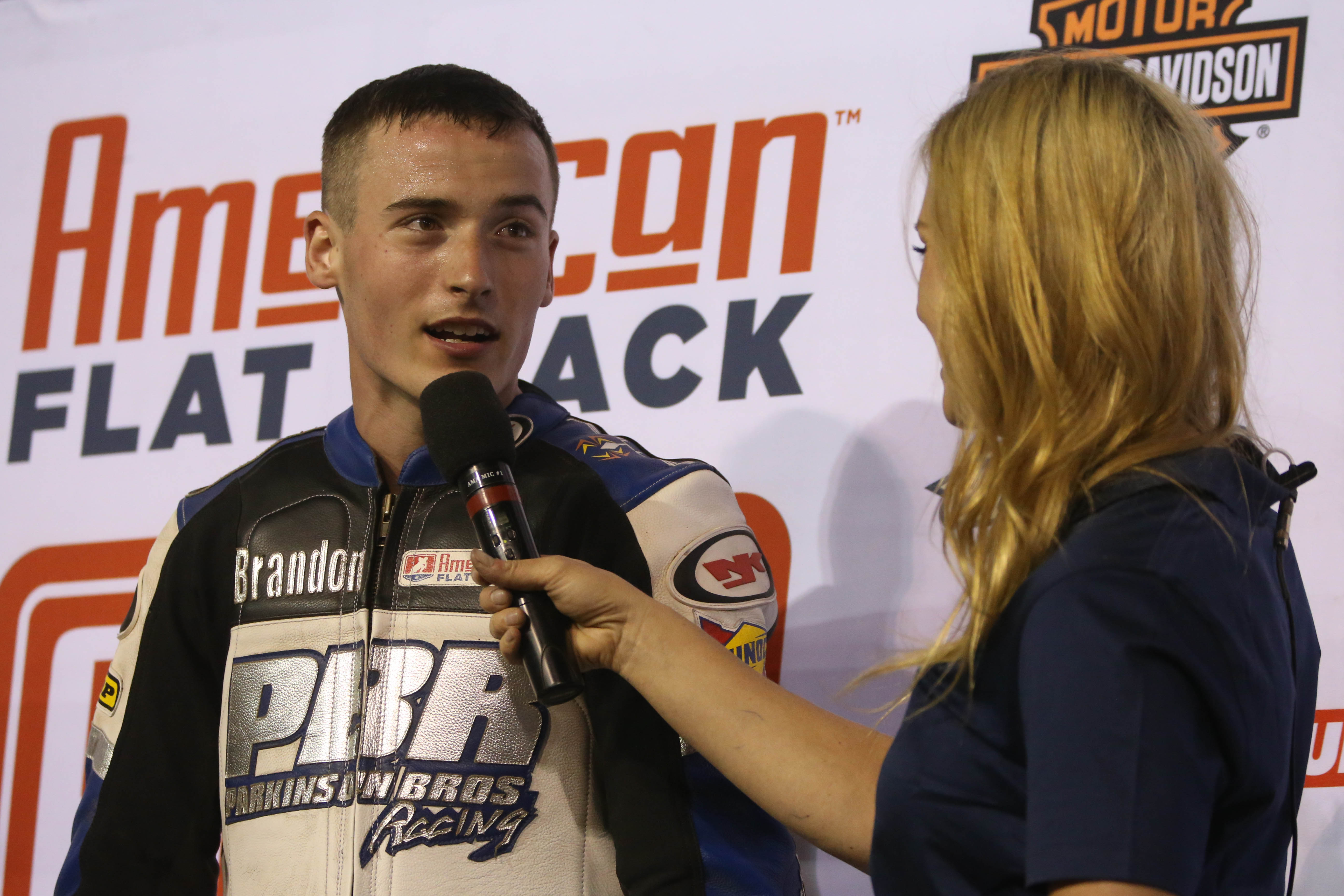