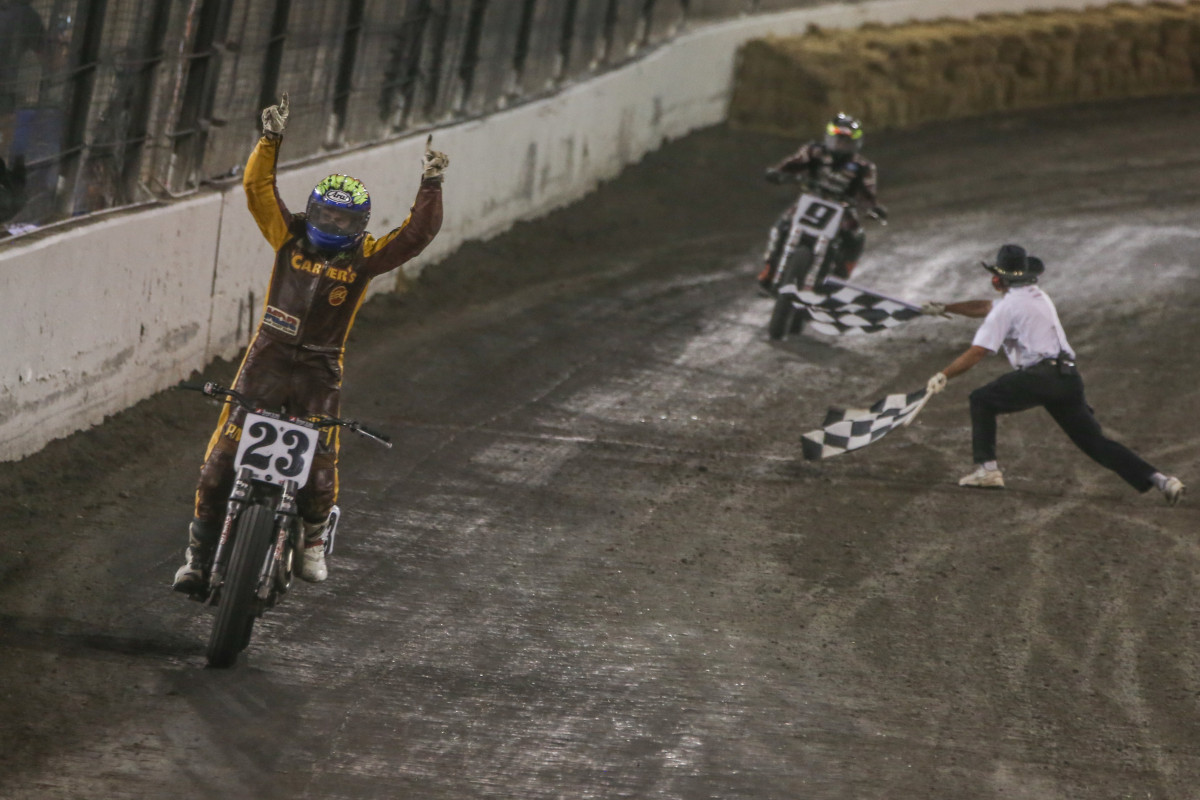 The previous three installments of this 50th anniversary series centered on the genesis and development of Harley-Davidson’s XR750, as well as the outsized contributions to its glorious history made by three titanic talents in Jay Springsteen, Scott Parker and Chris Carr.

However, while those stories of the XR span from the ‘60s into the new millennium and effectively defined the careers of perhaps the three greatest riders American Flat Track has ever known, it’d be a great disservice to the bike to suggest its history ends there.

In truth, the legacy of the XR750 transcends far beyond even those eras, heroes, and the sport of dirt track racing entirely.

To briefly address that last point first, it could be argued that no two-wheeled icon and their equipment have achieved the same sort of celebrity, and been etched so permanently into the public consciousness, as daredevil Evel Knievel and his fleet of red, white, and blue XR750s.

And the XR didn’t only succeed on dirt or in the air. Cal Rayborn was the hero of the ‘72 Transatlantic Match Races on a roadrace-spec Iron XR750 TT, and then gave the Aluminum XR its only two GNC roadrace victories later that year at Indianapolis Raceway Park and Laguna Seca.

Mark Brelsford actually earned the first (and only other) GNC roadrace win for the platform in ‘71 at Loudon on an Iron XR. A couple years later, Brelsford’s #1 Aluminum XR750 TT went up in flames (along with his hopes of defending the Grand National Championship) in a dramatic crash at Daytona International Speedway.

A decade later, that same destroyed bike was pulled from purgatory and re-forged into a pumped-up 1000cc XR-based racer that promptly won the Battle of the Twins race at Daytona with Springsteen at the controls.

If that wasn’t good enough, the resurrected machine was then dubbed “Lucifer’s Hammer,” wrenched by famed H-D tuner Don Tilley, and wielded by Gene Church. The pairing went on to claim the AMA BOTT crown for three years running from ‘84-’86.

But even when taking only the XR’s flat track accomplishments into consideration, there’s so much more to the story. While Springsteen, Parker, and Carr did combine for an astonishing 183 Main Event victories and 19 Grand National Championship, simple arithmetic tells you that still leaves an additional 319 wins and 18 GNCs on the docket.

Digging a bit deeper, 55 riders other than the Big Three won races on the XR750, and 11 of those 55 earned at least one Grand National Championship onboard it.

The full story of XR750’s reign also happens to be very much a modern one. Of those 18 non-Springsteen/Parker/Carr titles, the bulk of them came following Carr’s final Grand National Championship in 2005.

It’s only due to recency bias that it feels like the recent history of American Flat track can be summed up as the rise of the Kawasakis -- culminating in Bryan Smith’s 2016 crown -- followed one year later by both Harley-Davidson’s full pivot to the XR750’s successor -- the production-based XG750R -- and the return of Indian Motorcycle with its purpose-built XR killer, the FTR750.

The reality is the XR750 played as the backdrop for all of those monumental developments, leading ubiquity to instantly seem like antiquity.

The all-guns-blazing reemergence of Indian Motorcycle, in particular, had a massive impact on the sport. Indian followed the blueprint utilized so effectively by Honda in the mid-’80s with its once-dominant RS750 and perfected it with the added edge of three decades of technological advancements to call upon.

2000 Grand National Champion Joe Kopp was brought onboard in a testing and developmental role in 2016 and found the FTR to be instantly familiar following a long and successful career campaigning XRs. 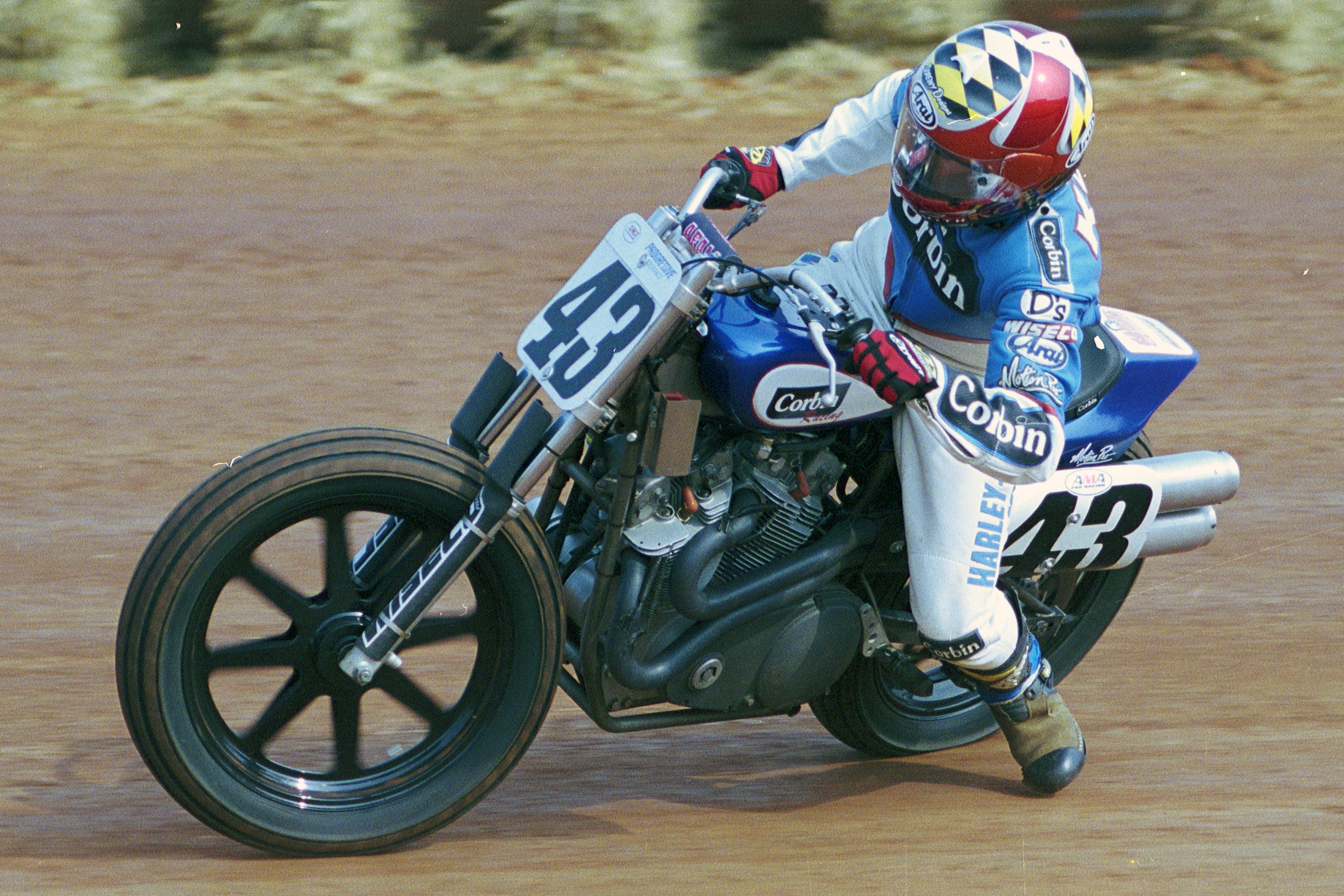 He said, “It has a purpose-built engine like in the XR750... I wouldn't say they copied it, but there are a lot of the same things, like a four-speed transmission and big heavy flywheels on the crank... a lot of similarities.

“The only thing that's really different, I'd say, is the modern technology with fuel injection and ignition timing and stuff like that.”

Kopp gave the all-new FTR750 its AFT debut in a shakedown ride at the ‘16 season finale ahead of its impending full-scale 2017 campaign.

The 47-year-old turned some heads with his seventh-place run in the Indian’s maiden performance at the Santa Rosa Mile, but that effort was largely overshadowed by Brad Baker, who gave the XR750 a proper sendoff by winning the machine’s final outing as a full-factory racebike in blowout fashion.

There was no denying Indian Motorcycle the spotlight the very next day, however, when it enacted the next stage of its plan for dirt track domination. Yamaha had beaten H-D and its superior XR750 in the ‘70s thanks primarily to the singular brilliance of Kenny Roberts. Honda had then done the same with its outstanding RS750 and a pair of superstars in Ricky Graham and Bubba Shobert in the ‘80s.

Indian took it one step further. It hired the series’ three most recent Grand National Champions, Smith, Baker, and -- the biggest catch of all -- Jared Mees, assembling its own version of the “Wrecking Crew.”

By that point, Mees had been well on his way to expanding the exclusive “Titans of the XR750” club to four. Before signing with Indian, he’d already claimed four GNCs on the XR and ranked seventh in the machine’s history with 20 victories to his credit. 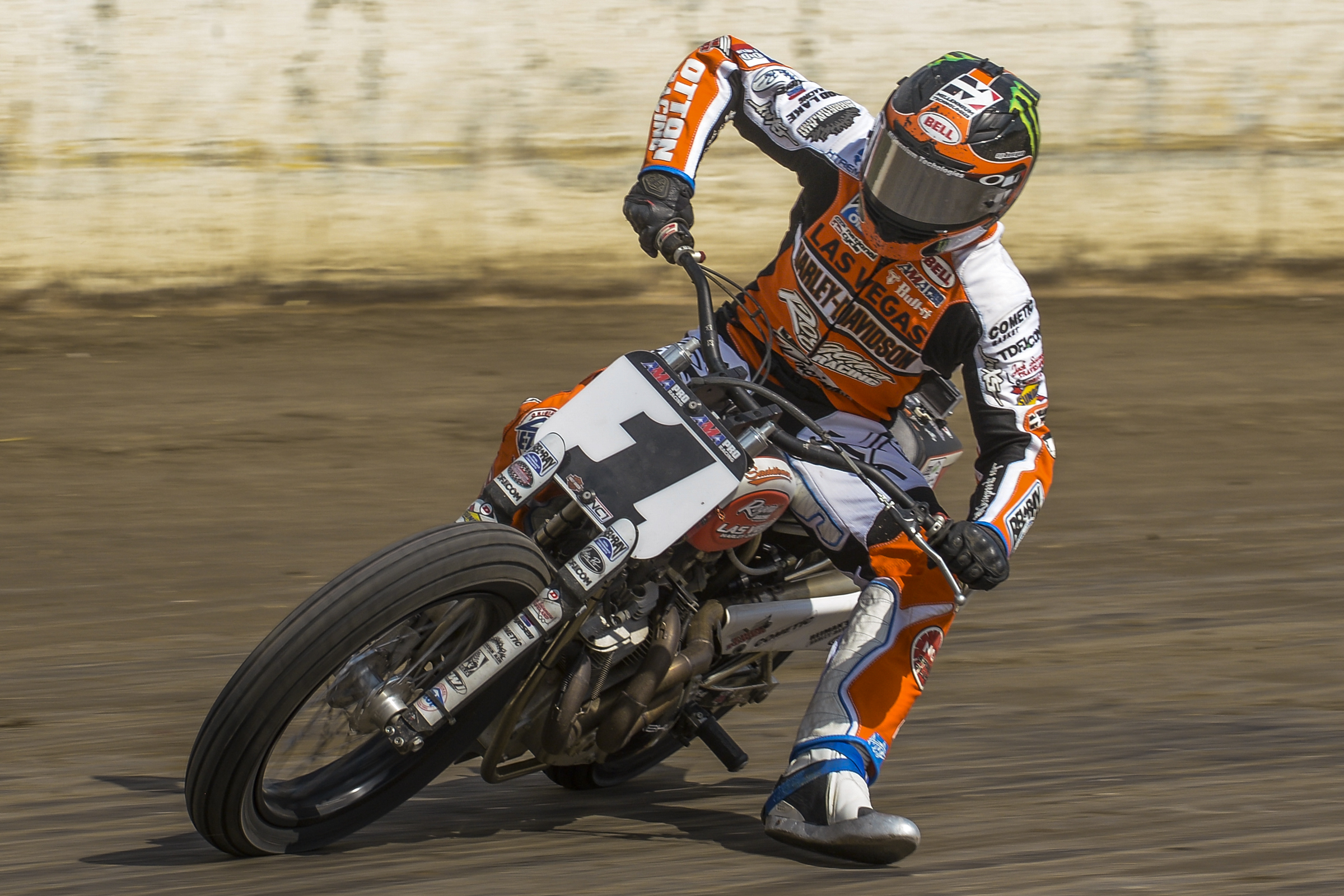 Mees seen here running one of many #1 plates, this one in 2015.
Photo: Dave Hoenig, Flat Track Fotos

Since joining Indian, Mees has only accelerated his assault on the record books, storming past Springsteen in all-time wins (now with 48 to Springer’s 43, trailing only Parker’s 94 and Carr’s 78).

And as a result, the perception of his place has likely been forever altered; the same way Ricky Graham, who took the 1982 Grand National Championship on an XR750, is best remembered as the master of the RS750, Mees seems destined to be most closely aligned with the FTR750 after his racing days are done.

Mees clinched the FTR’s first title in its opening attempt with two races still remaining in the 2017 season. With the championship already locked up, he entered the penultimate race of the year in Fort Worth, Texas, riding a run of five consecutive oval wins (a streak that likely would have been eight if not for some uncharacteristic start line mishaps at Lima)

Similar to the situation that helped pave the way for Honda’s overwhelming success in the ‘80s, Indian’s ascent transpired while H-D’s factory race program was most vulnerable, deep in the development phase of the new XG platform.

Yet, despite being “officially” left behind, the XR750 still had some fight left in it yet.

Privateer Jeffrey Carver, Jr., showed up for the Lone Star Half-Mile in a van with just crew chief Ben Evans in tow and a single XR750 loaded up with them. 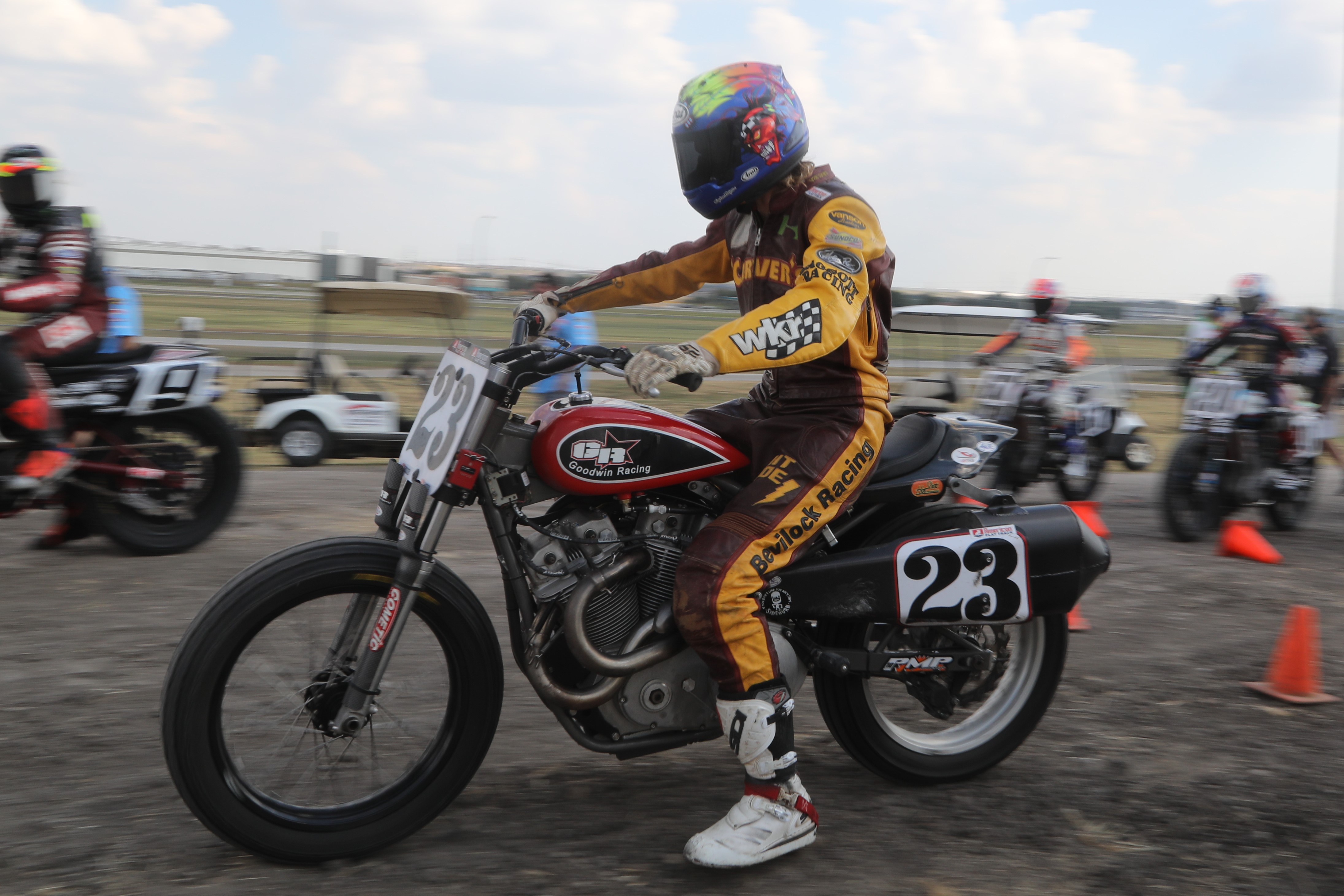 “We actually broke our Kawi the week before,” Carver explained. “We thought we were going to have to ride the backup, but its motor wasn't as good. We were sitting there at the shop, and Gary Goodwin was there. He had given us an XR, and he was like, 'What about that bike?'

“‘Welp, you’ve got one good one and that's all you need. Imagine being the last one to ever win a race on an XR750.’

“Man, I was so fired up. I'm not one to say, ‘Hey, we're going to go to this race and win. I just let the energy play itself out.”

Even with a field stacked with Indian FTR750s, H-D XG750s, Kawasaki Ninja 650s, and Yamaha FZ-07s, nothing stood a chance against Carver and that XR750 on a slick Texas Motor Speedway surface.

Nine-time GNC Parker said, “When you're on a track, the XR delivers the horsepower down to the track. When it gets slippery, the XR just has the characteristics to really hook up to the ground. The Yamahas struggled at that in their era and the Hondas struggled at that for a period of time too. That's the big thing of it. It will hook up to the racetrack where the other bikes would struggle trying to get tires to hook up onto the dirt.”

Carver said, “I had been close -- podiums and running up front. At the beginning of that year, I was going to quit and maybe try to find something else to do, at least part time. I didn't even know if I was going to the West Coast for the races. To come out and have that drive and that grit... I didn't care -- you had the factory Harleys, the factory Indians. To be able to go there and win… It was just amazing. I just had this determination in my eyes that day.”

Only one rider could so much as keep Carver in sight that evening -- Mees, who finished over a second-and-a-half back in second. 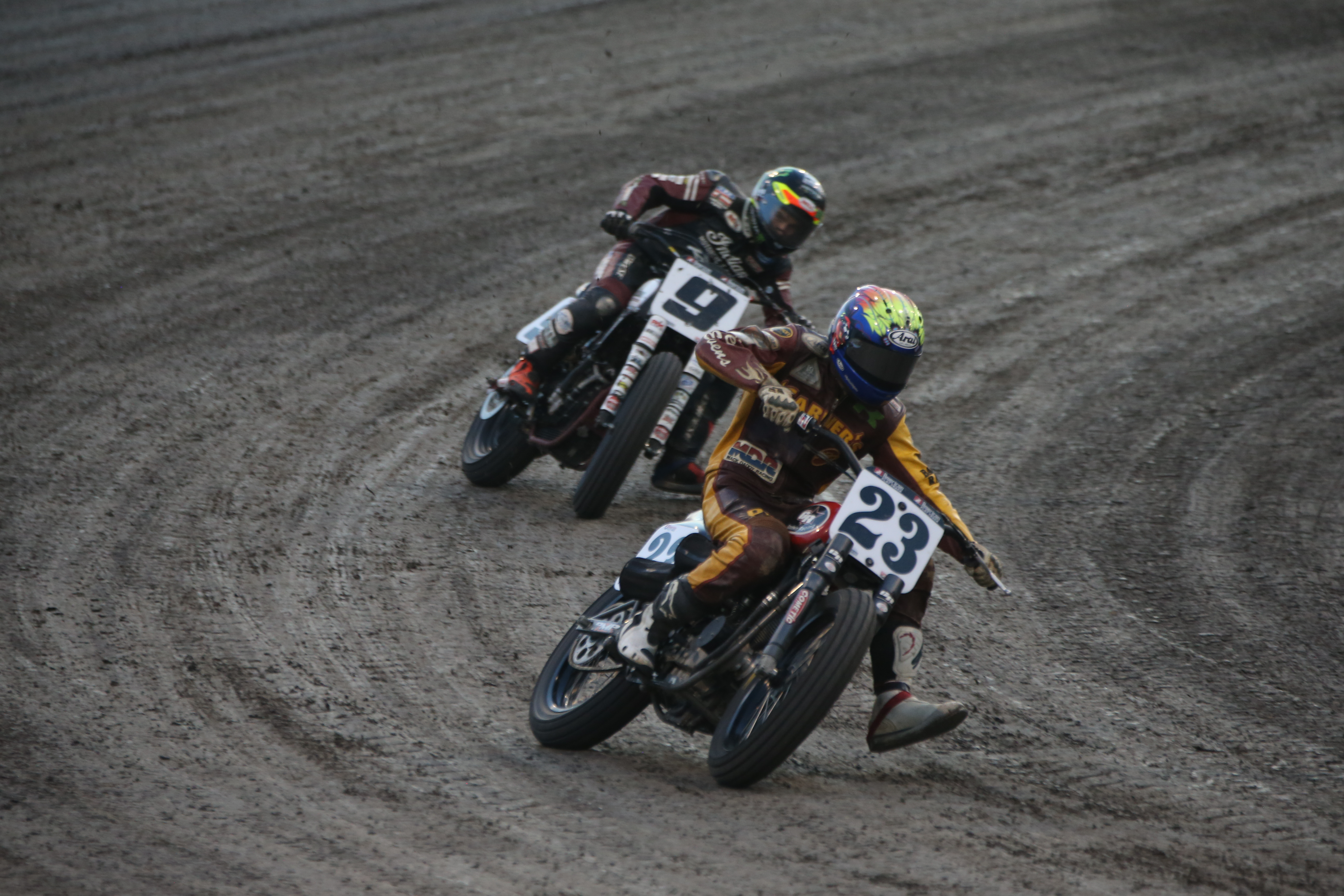 “I tried so hard to gain on him… I couldn't bridge the gap,” Mees admitted. 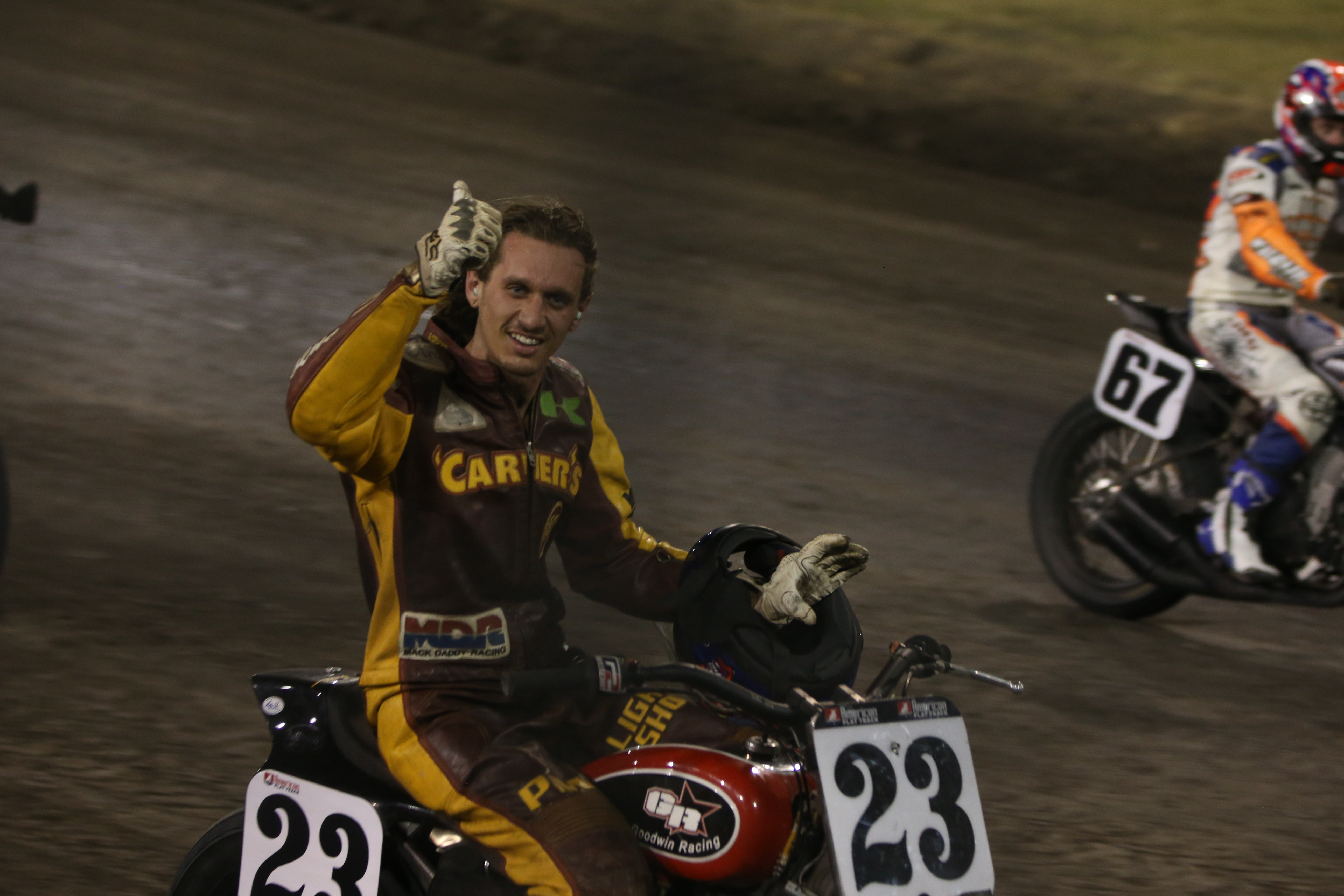 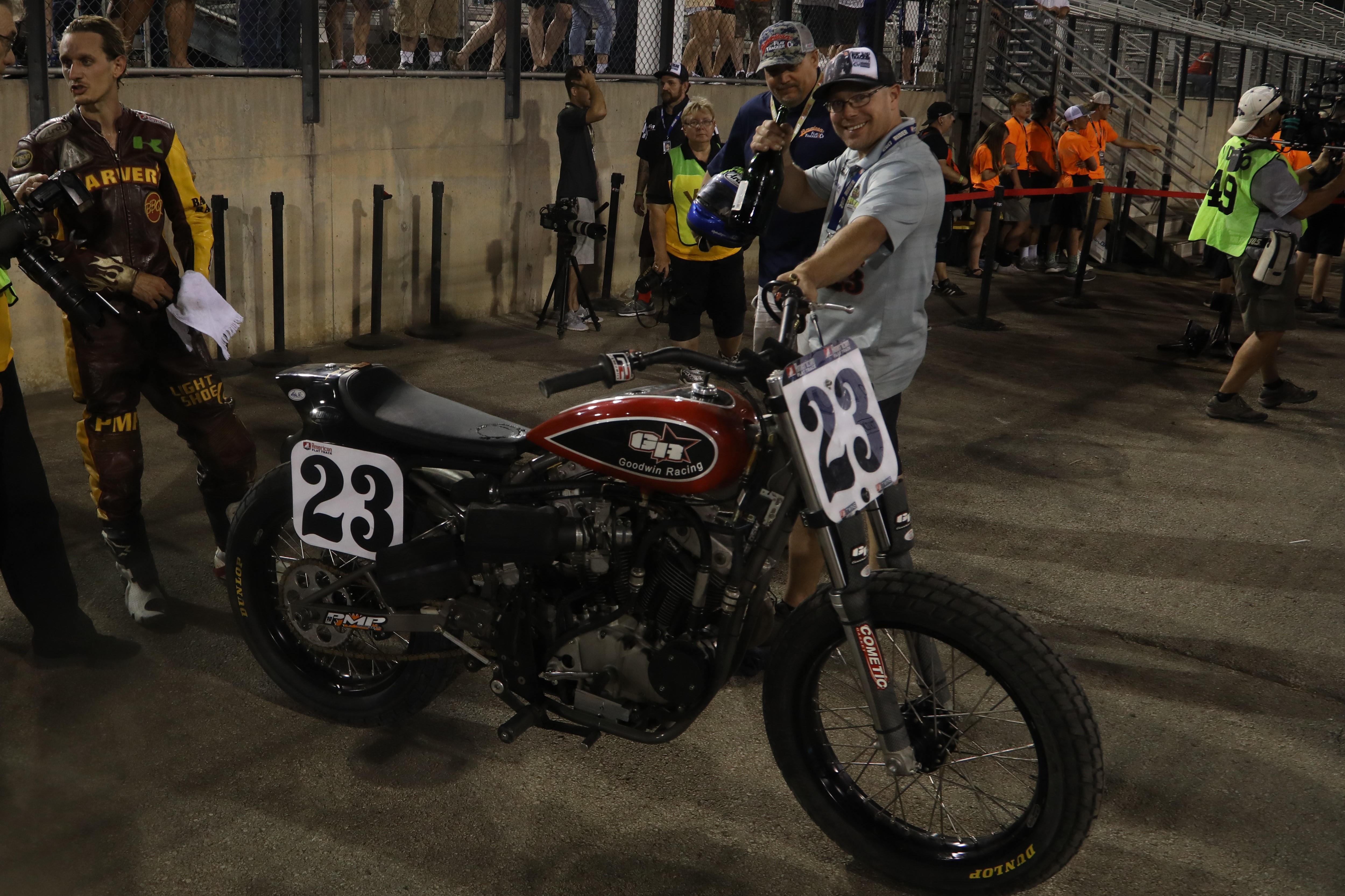 As the weekends and seasons continue to add up, Carver’s underdog victory in Texas seems more and more likely to go down as the XR750’s last hurrah. He did wheel it back out at the Atlanta Short Track early in 2018 to score another podium finish, but the series has only further fallen into Indian’s clutches.

Since Carver’s upset, the FTR750 has taken 34 out of a possible 37 Main Event triumphs. Meanwhile, while improving, Harley’s factory XG750R racebike is still looking for its first.

While impossible to predict at the time, Carver did give the XR750 one final bragging right. The FTR750 closed out the decade with 47 wins. And thanks to Carver, the XR750 ended the 2010s with 48.

The XR750 is now largely absent from AFT competition. Danny Eslick did manage to score points on it last season at Lima, but that served as only a fleeting reminder of the potential of its continued relevance.

Kopp said, “Sure, one hasn't won since 2017. But we really haven't seen them much on the track since then with a real capable rider. Honestly, there are some tracks... if I was 20 or 30 years younger, I would still choose the XR750 at times over an Indian, honestly.”

Asked if he believed it could still win, Parker said, “I do. I really do. Why would you not expect it? My career ended in 2000. Twenty years later... They kept tweaking it here, tweaking it there... You can have a 1000-horsepower motorcycle, but you've still got to hook it up to the ground, and that's the key issue. Just because you've got a faster, more powerful bike, doesn't mean you can go faster around a circle.”

Kopp added, “I know you could still win on that thing. There are certain tracks where it's favorable in my mind. A slick clay car track -- the slicker the better for that thing -- and with a more rounded straightaway, it would be hard to beat still. I'm confident in that.”

Imagine that… For all the obvious reasons laid out in this series and multitudes left unstated, the XR750 is widely considered to be the most successful racebike in motorcycle racing history -- perhaps the greatest vehicle in motorsports history. Is there even any competition? What other mechanical wonder boasts a half-century reign spent transforming talents into heroes and heroes into legends? And best of all, this legacy might not yet be fully written.