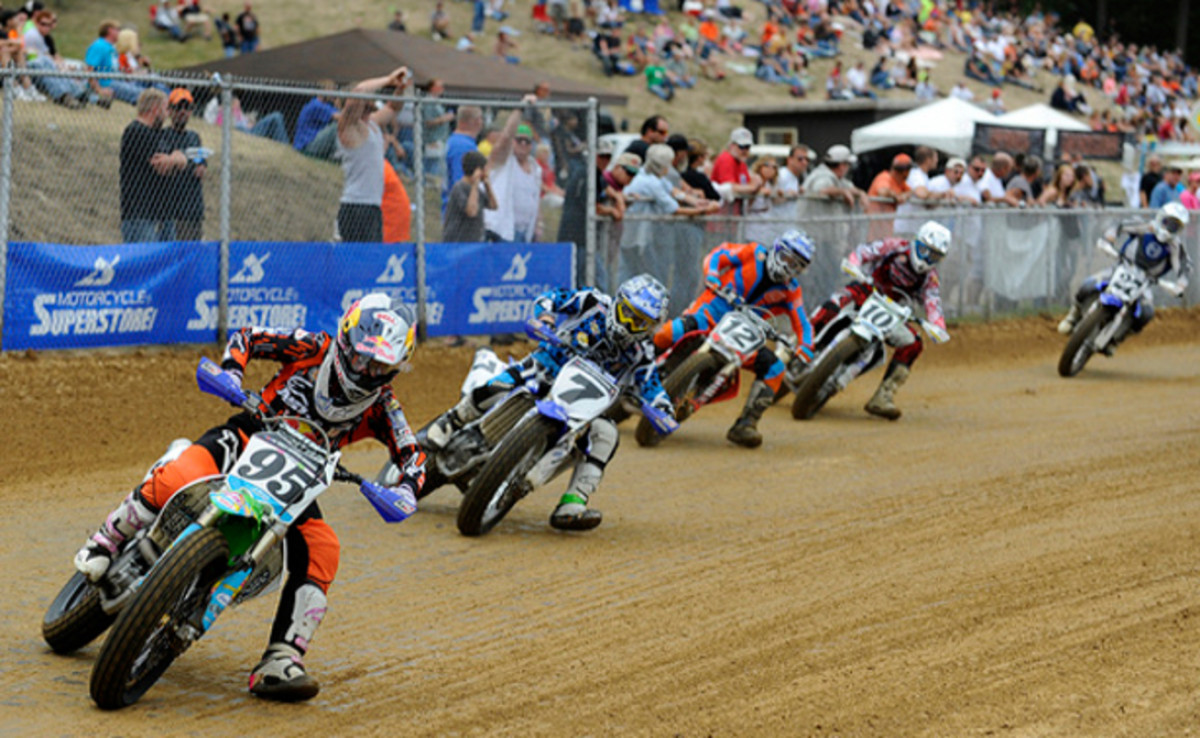 August 14, 2012 - This past weekend we had another wonderful race weekend in Peoria, Illinois. It was a bit of an odd one there because the weather was so nice. Every year I have been there its always 90 something degrees with high humidity. This year it was mid low 80s and not much humidity. It was nice because you could sit around and enjoy yourself without sweating like crazy.

We started the weekend off Friday at the Peoria Short Track for the Steve Nace All Star Series. It’s a smaller banked car track. I picked up a 2009 Honda 450 a few weeks back and have been working like crazy to get it ready for this race and I’m glad I did. It was a lot of fun. In practice the track was awesome. With the turns banked but so short it felt like a roller coaster. You know the feeling you get when riding a coaster and it “G”s out in a turn, that is what it was like on the track. You could ride anywhere on the track. After practice I was feeling good for the heat race but when I rolled up to staging
I had a bit of a problem the front fender was on the front wheel. Something had happened to the forks.

Luckily I had a backup bike to ride, Jacob Lehmann flew back to race my Honda for Sunday’s race at the TT but Hayden Gillim let him ride his Kawasaki 450 at the short track so I jumped on that. I was able to manage a third to get a front row start for the main but I really wanted to ride my Honda. Shayna Texter had a couple extra bikes with her so I borrowed a set of forks from her and after a little tuning I had them working good for me. Since I switched bikes I had to start on the 3rd row, there was only 11 experts there so I knew I couldn’t finish to bad and I wanted to get sometime on my new bike. After a great start I found myself in about 7th. I had some really good lines, running low in 1 and 2 and very high in 3 and 4. I was hooking up great and making up ground. By the end of the race I was 4th and right on 3rd.

Saturday we had the day off to get stuff ready for the TT and get rested up. James Hart had my 450 with him and all ready so I didn’t have to worry about that bike. I just had to get my other 450 ready for Jacob to race Sunday. It wasn’t much work just change oil, change rear tire, put the front brake on, and his numbers. The weather was so nice outside and it was fun to be able to take our time and joke around working on the bike. After we got it all done Kerri, Jacob’s mom Kalli, and his girlfriend Brittany, Jacob,
and I all went to the mall to just walk around and look at everything. Then went to a fresh market to get fruit and food for Sunday. That night we had a good dinner and off to bed early because Peoria is always an early Sunday race.

My day started at 5:30 getting up so we could leave for the track at 5:45. We always pit in the same spot so I like to get there early so we can try and get that spot. The weather was so nice but we had a chance of rain all day. The track was perfect as well. It was so much smoother then it usually is and a lot faster. We struggled a little bit with bike set up in practice and qualifying but kept getting faster. Once the heat race rolled around we had a good bike. We had a front row start for the heat race but were about 4th over. We got a great start almost the hole shot but Jake Johnson was able to nudge us out a little. He got a bit of a gap right away but after a few laps I was able to chip away at it. Brad Baker was right on me so I was working on trying to get up to Jake but stay in front of Brad. He got by me once but I was able to get right back by him to finish second and get into the dash.

In the dash I was starting on the outside of the front row. I was getting really good starts but since I was so far on the outside I would just get pushed way wide in the first turn. The first four got a gap on me and it was only 4 laps. I was able to catch them a little but just didn’t have enough time. We were ready to go for the main. I got pretty lucky in the main because we had a restart. I did the same thing as in the dash and got pushed way wide and made a big mistake. Every race on the first lap everyone slows down going up the jump and I was so far back I thought it would be a good idea to go up on the grass hill and try and make some passes on the outside, which wasn’t a great idea. I hit some potholes and almost went over the bars. For the second start I knew I needed to give up a little and get in line with everyone.

I was able to get down and be in about 7th or 8th. The track was so fast it was hard to make passes. The only spot you could really do it was if you could get a good drive going down the front straight going into turn one. The first person I passed was Robbie Pearson then worked on Briar Bauman then sat behind Sammy Halbert for a lot of laps. His bike was running really good and it was hard to get the drive on him.

The whole time I was working on him I had Brad right behind me working on me. With three laps to go I was able to get by Sammy and put a bit of a gap on him. I think if I could have gotten a better start I might have been able to push Jake Johnson for third. For me 4th wasn’t bad at all since last year there I think I got 11th.

Even though we had a great day of racing we had 5 riders get hurt pretty bad and go to the hospital. That was almost 10% of the riders which is pretty crazy if you think about it. From what I’ve heard they are all getting better but still need our prayers so please keep them in mind. They are great people and I’m sure they will be racing again in no time.

Now I will be getting stuff ready for Indy. I have my two 450s with me to get them ready for the Short Track Friday night and James Hart is working his butt off getting the 650s ready for the Mile Saturday.

Then Sunday I am trying to get to the GP. Hope everyone had a great weekend and if you make it to the mile don’t forget to come by the 95 pits.