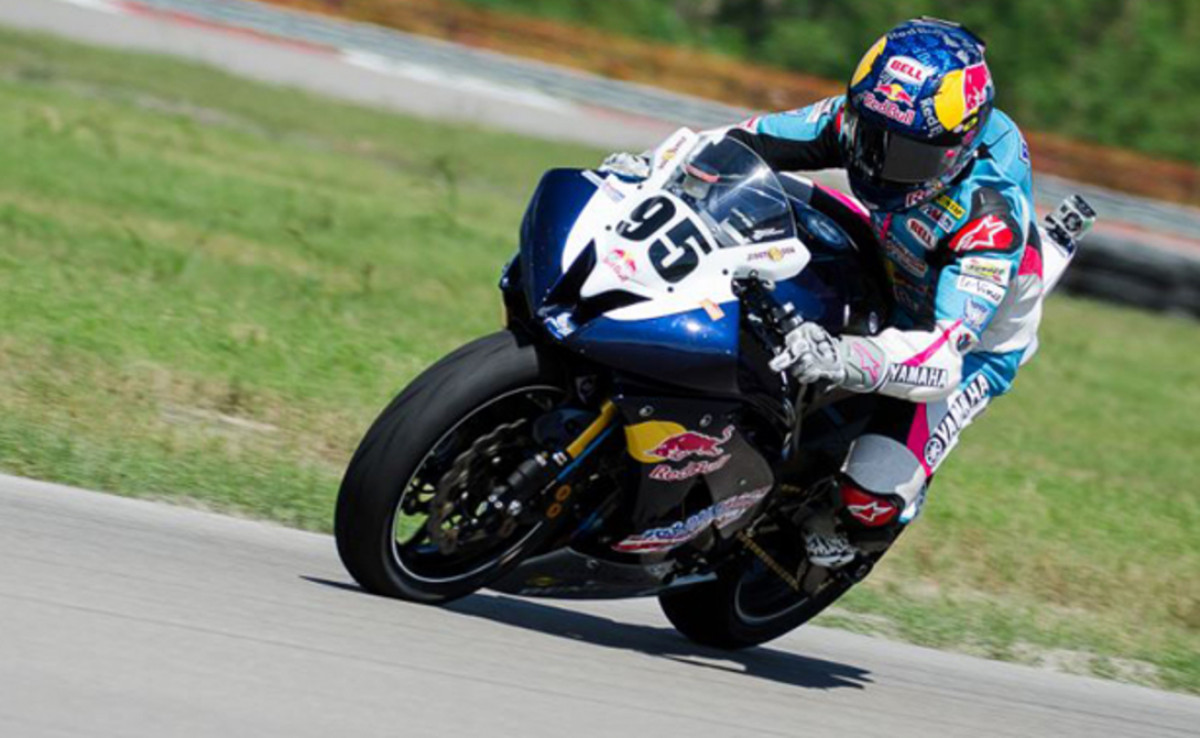 Hi everyone, hope you guys are doing well. I know it’s been awhile since the last race but I still wanted to get this update out to you guys. Right from Nola, Kerri and I went to Pomona for the Dirt Track final. After that I stayed for a few more days to do a SuperCamp then home for a couple days and off again to Delaware for another SuperCamp which got cut short because of Sandy. I will just hit on a little bit of each so this report doesn’t turn into a book.

To start off it was a normal trip down to New Orleans for the final round of the AMA Pro Road Racing series. Leading up to the race I changed a few things to prepare for the race and I think it really helped. It showed in my results, finishing the year off with my best weekend. We did have two crashes but I was able to bounce back from them and go just as fast. This year we had 4 crashes and 3 of them happened at Nola. After the weekend was all said and done we walked away with a 3rd-5th finish. I think the 5th could have been better but we missed the set up a little bit the second day.

After the weekend was over we had the banquet. It is always a good time to go and see everyone away from the track and out of our race stuff. The big joke is it’s actually a job fair. Our team had a pretty good showing there with all four riders going up on stage to get awards. Myself getting the Sunoco “Go the Distance” award, meaning I did the most miles out of the whole DSB class in practice and races. Hayden Gillim got 2nd in the SuperSport West, Jake Gagne got Rookie of the Year, and Tomas Puerta got 3rd in SuperSport East.

That was on a Monday then on Tuesday Kerri, Hayden, and I drove all day to get home. Well actually I drove, Hayden slept, and Kerri kept me awake. Then we had a quick turnaround time before flying out to Pomona for the AMA Pro Flat Track final. The race was on a Saturday so we flew out Friday morning and got the Friday afternoon. I was really looking forward to racing Pomona. I felt like I had less pressure on me since the road race season was over and I was going to be able to just ride.

The day didn’t start off great. After racing York on the 650, James and I thought we found a better setup for the bike. It was 180 degrees different from what we usually do but we decided to try it at Pomona. It wasn’t the hot ticket and we went back to our regular set up but the track was slower. We went faster but not fast enough to qualify better. In the heat we barely missed the dash but had some ideas for the main. Once the main rolled around we were moving forward. We started 15th and ended up 5th. Not what we wanted but we made a lot of forward progress.

On that Sunday I left right from Pomona to fly to Calistoga for a two day SuperCamp. Then from there I came home to amazing weather. Since I was gone on my birthday Kerri had a party at the house the weekend I was home and a bunch of us rode 100s for two days. I alone went through 2 and ½ tanks of gas. That’s a lot for a 100. It was a blast. The whole next week it was in the 80’s and I was able to spend 5 days on my Specialized Mountain Bike before heading to Delaware for a four day SuperCamp.

That camp was a lot of fun. It was the first time I had been at that location. I flew out there Wednesday night, Mikey Carder picked me up after driving for two days and drove me to the hotel getting there at 1:30 in the morning. We only got 5 hours a sleep but it was totally worth it. Thursday was set up day so we hurried and had everything done by lunch. After we ate it was time to ride. We got to ride for probably 3 hours doing whatever track we wanted. The next few days got kind of crazy because of Sandy. We got one camp in but had to cut the second one to one day so we could leave before the storm. The day after we left all the roads in Delaware got shut down so it was a good thing we left when we did.