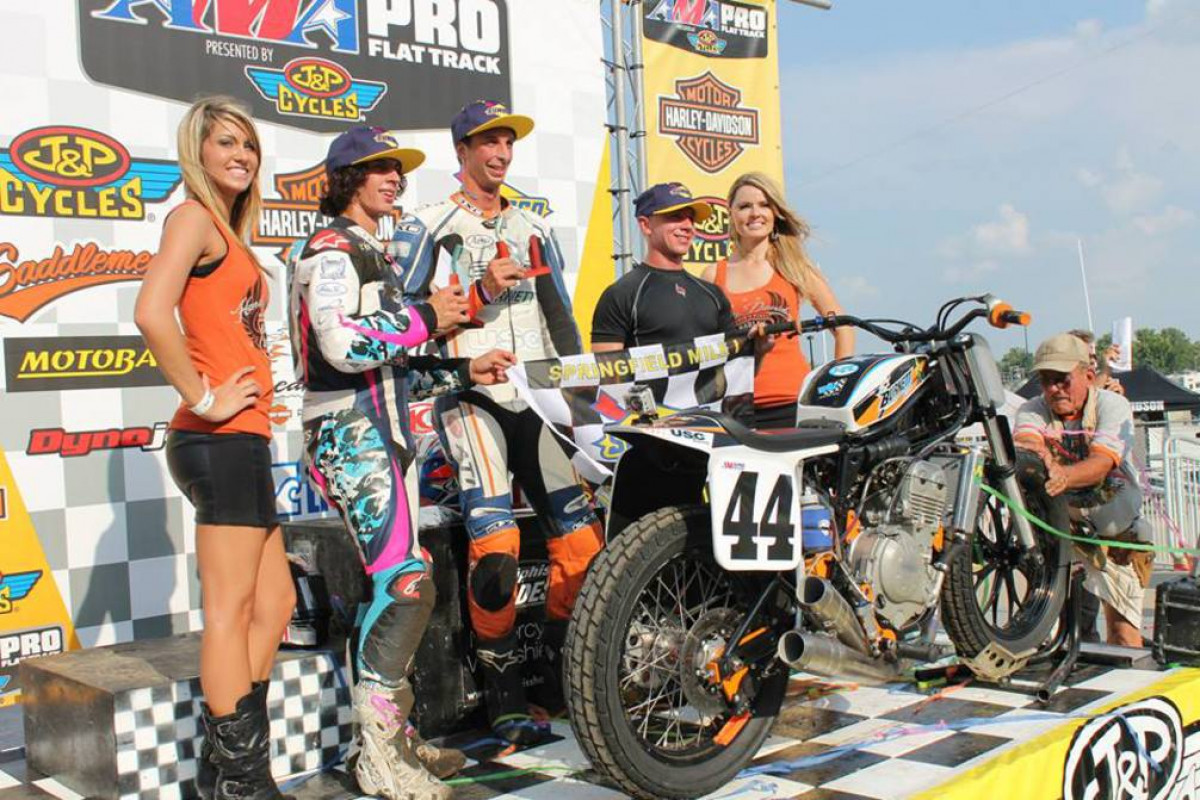 (September 5, 2013) - Wow, talk about some racing. In the span of nine days, we did four races. It was so much fun, it was real busy but getting to race that many days is awesome. It all started with the Mega Mile in New Kent, Virginia then we went to Springfield, IL for three days of racing on the Short Track and Mile. The way the Road Race schedule worked out this year it gave me a chance to spend about a month racing Dirt Track. It was also about the best month of the Dirt Track schedule so it was real good.

To start off we were at the Mega Mile, around just the inside pole it was 1.25 miles so depending on where at on the track it could have been 1.50 miles. I was really looking forward to the weekend until we got to the track. I was just thinking since it was a mile it was going to be just a normal track until I got there and realized that it was a horse track. Reading this you probably think that’s no big deal but it is, that means it’s a cushion, I knew it was going to be a long day.

That was until I got out in practice and found out how amazing and fun the track was. On a twin you could go WIDE open feet up all the way around, I had never ridden anything like it. Every time we got on the track we got faster. When we lined up for the heat race I knew I just had to get a good start and go right for the cush, as they say in the business. So that’s what I did, I was running about 4th and was going around people on the outside. It was such a cool feeling and once I got in the lead I just kept going and won the heat.

Then that put us in the “Dash for Cash”, we knew the track was changing and the cushion was going away so we knew we needed to ride on the bottom. The dash is only 4 laps so I spent 2 laps riding down there dropping back to 6th and having to hope. So I decided to go to the cushion and see what I could do, I came from nowhere and got up to third. We knew in the main I had to go right to the cushion and just go and hope it would stay there long enough to do well in the main. That was until the track got real dry, this was AMA Pro’s first event there since 2002 so track prep knowledge wasn’t great, they tried their hardest but by the main it was no good. After the race I was pretty pi$$ed off, I felt like I had a good shot until the track went to crap. It got so dusty it was hard to even push, but getting 6th wasn’t so bad. After I cooled down I knew AMA tried their hardest to give us a good race track and after so many peoples bikes broke I was happy ours still ran.

I really hope we go back again next year. I heard there were about 6,000 people there, it was a different crowd because it was all horse people in suits and dresses. By the end of the day I think we had them turned into motorcycle fans. They were all drinking beer, ripping the sleeves off
their suits, the ladies ripping their dresses shorter. Well ok maybe not but I think they really enjoyed the racing.

After a couple days at home riding my specialized bicycle and getting my 450s ready it was off to Springfield Friday morning for the Steve Nace All Star Short Track. Springfield has one of the best Short Tracks and the SNR crew kept the track great all day even with a 105 heat index.

After practice we seemed to have the bike working good, we had a two hour break until the heats started so we wanted to make final decisions on bike set up. Before the heat they dug the track up so Billy Gruwell and I decided to put a fresh tire on. We went out and won the heat but at the end of the race when the track was brushing off I could not hook up at all, luckily for us James

Hart showed up and checked my air pressure showing that we had 20psi in there. That’s a lot when we normally run about 12. Billy and I both thought the other one checked it. Once we got it set we were ready to go for the main.

Going out to the line for the main the first two fast heat race winners (Jeffrey Carver and Briar Bauman) decided to start on the outside. Then Brad Baker picked pole so I went second off. We were both laughing and blown away that they picked the outside, on a Short Track you always go to the pole. From second I got the hole shot and lead until about lap 13 out of 20. It was one of the best races ever, I had a lot of people all weekend tell me they really enjoyed the race. Brad and I ran side by side for probably 18 laps. I was running the low line and he was up top, it was an intense race. It was so much fun, we have raced together since on 50s and it was just like the old days. Getting 2nd was good but Brad and I have some unfinished business.

The next two days was the legendary Springfield Mile. The first Mile in May got rained out but I think it was better and a lot more fun to run both of them back to back. We walked away with two 3rds during the weekend. I thought it was pretty special to get two podiums back to back on the Mile until I realized Brandon Robinson and Bryan Smith did the same thing. Both days it was Brandon, Bryan, and me on the podium. Sunday I really felt like we had the bike to win but getting double podiums was awesome. After the race on Saturday us three made history then after Sunday we made even more. Saturday was the first time since I think May 1987 that a Harley wasn’t been on the podium and it was the first time Kawasaki swept the podium in a Grand National twin’s race. But not only that I don’t think that’s ever happened on the 450s either. Getting 3rd again twice is bittersweet, it’s always nice to be on the podium but man am I tired of those 3rd places, we did make some history so that’s awesome.

Both races had some real excitement but I would have to say I enjoyed Sunday more. But first let’s talk about Saturday, it was a hard race and very hot. A lot hotter than Sunday so that made it harder and everyone just seemed so aggressive it was crazy. We also had a bit of a traffic jam when Bryan had a bike problem and a pack of us ran into each other, except for Brandon, he checked out Saturday and won by 5 seconds. It was an intense race and we barely got 3rd, Willie McCoy almost drafted us at the line. We beat him out by .004, so come Sunday I had a bit of a better plan.

Sunday the weather and track conditions where a lot better and the race was a lot different. As always the first couple laps were crazy but once it all settled down I was running 7th. It was weird I felt like I had nothing, I couldn’t move forward at all. It did give me time to sit and think how awesome it was to be racing one of the best bikes in the field and be running upfront with the best Dirt Trackers in the world. It’s amazing how you can forget how lucky you are to be doing this stuff and you seemed to get reminded of it at odd times. Then it was back to racing, I knew I had to do something, try something, and then it was like I was on a whole new bike. With five laps to go I found an awesome line and it was like the bike was on a mission and I was just holding on. It was like a movie where it just got a mind of its own and started going. I really think with a couple more laps we might have been able to really win it.

It has been an awesome month of Dirt Tracking, getting three podiums and even making my way to 9th in points but now it’s time to get back to work. We have an off weekend then it’s off to New Jersey for the last two rounds of the AMA Pro Road Racing season. I can’t wait to get on the Road Race bike.