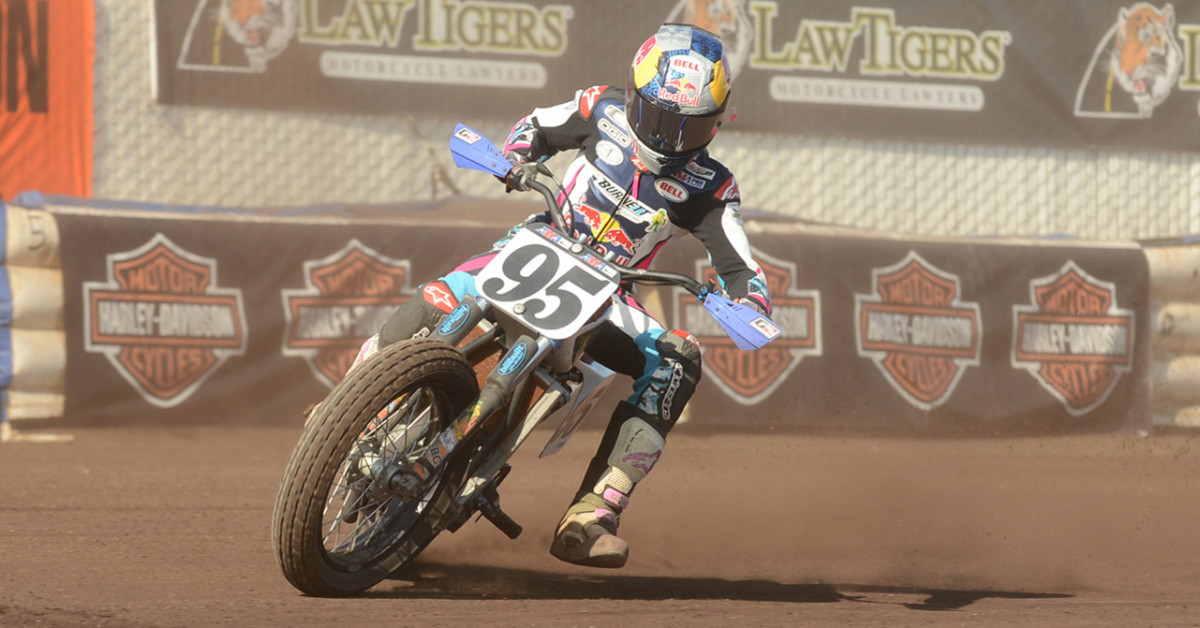 The whole 2013 AMA Pro Racing season is over for me. All the Dirt Track and Road Racing is finished. It has been an awesome year and so much fun. To finish the year off I ran the season final in Pomona, CA at the Pomona Fairplex. It’s always a fun race for me to do, not only is there a lot of people because it’s the last race and because it’s on my birthday. I’m always hoping I’ll have some extra luck on my side but it seems to never happen the way I have planned.

This year we decided to go a few days early so we could do some riding on the 450’s before Pomona. TJ Burnett rented Perris out on Thursday so Brandon and I could have a test day with Jimmy Wood (Southland Suspension). It was a really productive day for me but not so much for Brandon.

After getting up at 2:30a.m. to drive to Nashville to fly out at 7 we had a direct flight to LAX, hopped in a rental car and headed to Perris. As I was pulling up Brandon was just putting his helmet on to go on the track. I got dressed as fast as I could so I could ride with him. I guess from flying and driving all morning my feet where swollen up, I could barely get my boots on. They felt about three sizes too small. The first couple laps out my hands went numb, I guess riding right after flying isn’t the best idea. Anyways we got to riding and after about 30 laps Brandon’s bike decided to break and ended his day. It was a bummer because it was a lot of fun riding with him. I kept riding until about 5 or so that night, using up a whole tire and a tank and a half of gas. That’s a lot of gas on a 450. Jimmy worked his butt off all day and really got the bike working good, it was nice to be able to spend the day testing.

Friday, it was back out to Perris for a day of racing but just watching for me. I decided to take the day off since we had Pomona Saturday and I got in a ton of laps Thursday. I had some friends racing and my dad was racing to so I wanted to just watch. It was fun having my dad race and me not, after all the years of being told what to do and how to do it, it was my turn. I was giving my dad crap all day and I loved it. It was funny and a good time, I think my dad enjoyed it too.

Race day had finally rolled around but it didn’t feel like it. I woke up Saturday morning, wasn’t really nervous or stressing about getting to the track until about 10:30. That was when we were driving to the track, I saw a sign advertising the race and it was like butterflies instantly hit my stomach. It’s one of those feelings that doesn’t go away until the checkered flag drops during the main, when you get it you know its race day and its going to be a long day.

After all season I think we finally got a good rhythm for setting up our pits. It’s by far the most time consuming of all the teams but it looks good. We have walls to set-­up kind of like the Moto GP garages, like I said they look great but they just don’t have an easy way to get put up. Once all the fun was done, all the bench racing was over, and all the gear prep/tear off installment was done it was time for practice.

When we got out on track for the first time our gearing was way off, by two teeth which is crazy. I was bouncing off the rev limiter real bad, after about too laps on that I slowed down a little. I didn’t want to pull off because there was still other things we could learn. After was all said and done James Hart, Billy Gruwell, and Jimmy Wood basically made a brand new bike from all the stuff we changed. We qualified 7th that was front row, not as fast as we would like but good.

The heat race we had some fast people in it, it was going to be difficult. I had a good shot at making the main but we really wanted to be in the Dash for Cash. After a race long battle between 2nd-­4th we ended up 4th. The bike and gearing wasn’t where I wanted it, we changed it but it was hard to make a choice without having the Dash to try it. Since I wasn’t in the Dash we had a while before the main so I got to watch some racing. It was really neat and it seemed like all night there was some awesome battles every race.

By the time the main rolled around I was ready to go, I was feeling good about the bike and myself. The dirt was real wet this year so I had 20 tear offs packed on my shield and was ready to go. The race got broke up into segments, that really helped because the times were so close it was hard to make anything up. Starting from the second row I got a decent start but nothing amazing. I worked my way past a few guys but then stalled out not making up much ground until we had a red flag. I was running the same times as the leaders so I knew I could run with them. We had a 10 lap dash to the finish. Again I had another crappy start, (come to find out we had a clutch/gearbox problem) but I made all the ground up I needed in turn 1. Everyone went flying into turn 1 hitting all the ruts, bumps, and holes pushing them all high. I was able to stay down real low and get from 10th to 5th around turn 1. Right there with the lead pack, watching the battle for first was so awesome, Brad Baker and Bryan Smith were going at it. Every turn the lead would change, I could smell the gas from their bikes but couldn’t quite get up there with them. I was racing around with Jared Mees making ground up on him every lap and coming to the line missed passing him by .01. That put me finishing 5th, with after everything said and done it was such a fun night and another Top 5 at a kind of track that I usually struggle on is a great night.

It was a really great weekend but to top it off we spent the day at Universal Studios on Sunday with a bunch of friends. It was a really fun day and a nice way to finish off the year. We have a couple weeks until the first indoor Dirt Track race. It will give me some time to settle down and get some training in before the winter season starts up.