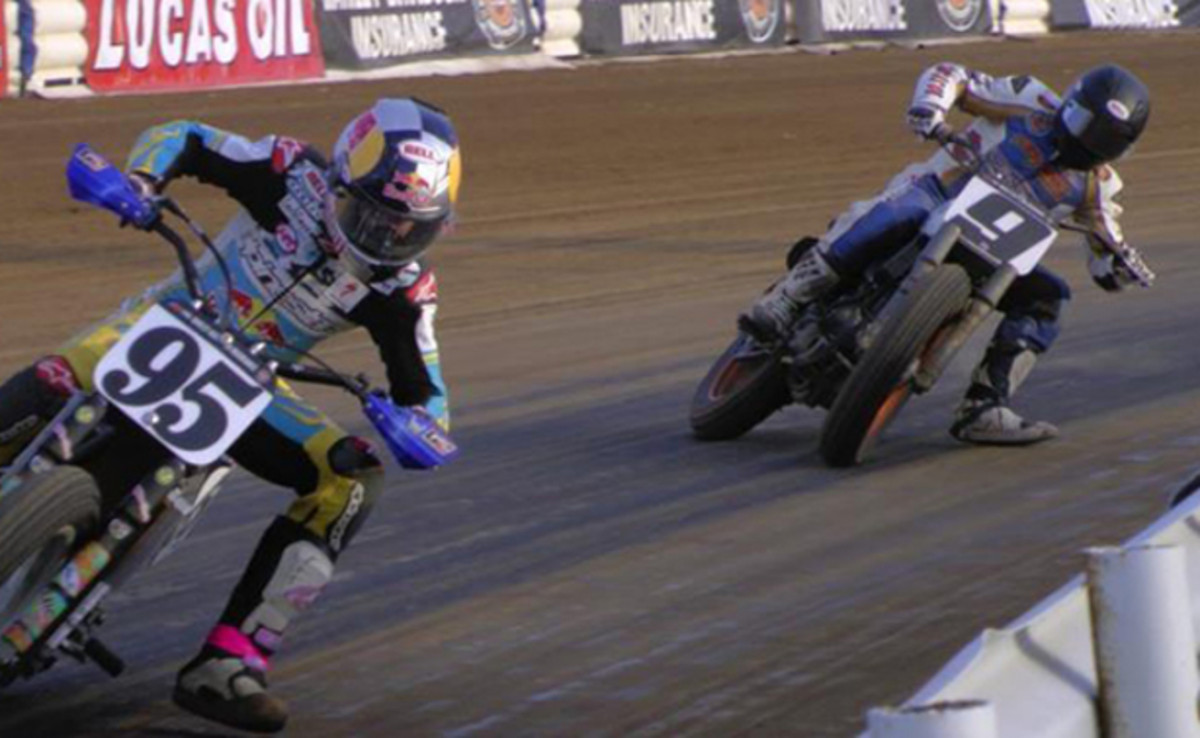 (August 22, 2012) - So this past weekend we had another great weekend in Indy. It was another three day weekend because I went up to race and watch the GP. It was really cool to just go watch because at Laguna we have to race. On the Friday and Saturday I did a little racing myself. Friday night being a Short Track race and Saturday being the world famous Indy Mile. After the two long days of racing I got to go to the Speedway to watch a day of racing.

It all started Thursday night heading up to Indy. I decided to go up early so I could go to the Speedway before I headed to the Short Track race Friday afternoon. I got into Indy at about 10 PM Thursday night and went to check into my hotel but they said they didn’t have a room for me. Every hotel around was full but luckily I was in my van. I called my buddy Jon Heinen because he was there working with the Attack CRT team so I could take a shower the next morning in his hotel. I slept in my van at his hotel, got up the next day took a shower, ate some free breakfast, and was off to the Speedway.

Every American GP race I always look forward to eating at the Alpinestars Hospitality. I loved there food when I was in Europe so it’s like a treat when I get to have it. I waited until after lunch to head over to the Short Track race. This race was just a local race but had a lot of fast guys. I disagree a little how they had the classes set up but I don’t run the show so it’s not my choice. They had one 450 class so every amateur, pro sport, and expert raced together. There were about 50 of us and no amateur made the main, to make it in you had to win the heat or the semi. Other than that it was pretty fun, the track is always changing there so you have to stay on your toes with the setup. I enjoyed the day because I finally had both my Honda 450s done and in the pits together, to me they look really nice because they look the same and was cool to have them both sitting in the pit. The day started off well with practice. James couldn’t make it because he had to get the 650s ready for the mile so I was left alone working on the bike but I was able to call him for setup details. Once the heat races started the track became a one line track so the start was going to be really important. We had seven 450 heat races but I was starting on pole in mine. I was able to get the hole shot with Sammy Halbert behind me, I knew he would be coming but my bike was so smooth and working great, I was able to pull away a little bit. After about 2 and half hours of waiting it was time for the main. Jared Mees had the first fastest heat with me second and Henry Wiles third. I got off the line pretty good but was in third behind Mees and a Pro rider.

After stalking the Pro rider for a few laps I was able to get by him in the middle of turn 3 and 4 when he went a little wide. Mees had a pretty good gap and I had a good gap on third as I was running him down a little lap by lap until we had a red flag. I took a little gamble by running a Maxxis because once they get hot there no good. At the restart Wiles was able to get by and I finished 3rd at the end of the race.

After a long day at the Short Track it was time for the Mile. Of course we had to be there bright and early when practice wasn’t until 3 that afternoon. We were in the pits unloaded 2 and half hours before tech even opened. It’s ok though we had plenty of stuff to keep us busy until things got going. I was looking forward to getting out on the track, it was my first mile in a year and a half and my first one on the 650. Practice went pretty well, we were a bit slow the first session just trying to get the set up figured out but come the second round we were 5th. The track was just awesome, it was perfect and so much fun, I really enjoyed myself while I was out there. But in the third session the track was real dry and we couldn’t get the bike to work good so I ended up qualifying 6th which is a front row start so I was happy with that. In my heat it could have been the main event with how many of the front runners where in there. We had a good battle with Jared Mees for a few laps while Bryan Smith was able to pull away a little. Once I was able to break away from Jared I started chasing down Smith and with about 3 laps to go I was right there with him. I tried a couple passes on him but just couldn’t make them stick but we were in the dash. After a little bit of a break the dash was up. I had to start down on the inside of the track where there was no grip at all so I got a horrible start. I played the race smart and was able to work my way up to 3rd by the end of the dash I was right on Smith and Johnson and was feeling good for the main. After having two long days of racing I was a bit tired so I sat in my lawn car and put my feet up on my 450 stand to take a quick power nap before the race. It was the most calming time to sleep, all I could hear were bikes going around the mile, it’s probably comparable to people that like to listen to the rain or ocean when they sleep. After the little power nap I was ready to go for the main but I sure was nervous, I probably peed 5 times before the main. I knew where I was going to start, it was the same as the dash, not the greatest but I had to make it work. The race is 25 laps so I knew I had plenty of time. Once we got into turn 1 I was probably about 11th or so and my goal was just to pick one rider off a lap. There were times I could get two but I didn’t want to do anything silly and blow the groove and go backwards. I just wanted to keep moving forwards.

Then at about lap 10 I was sitting 6th catching the top 5 fast and then my bike broke. Come to find out it was the fuel pump. I don’t know what it was but I was just feeling so good that day. I felt so good on the bike. The last few races have been like that, I feel like I can just get on the bike and ride and enjoy myself and it’s nice to have that feeling again. So the bike broke going into 1 and I got up off the line let everyone go by me then went to the bottom of the back straight. Once the bike stopped I got off, had to climb two fences with all my gear on that I watched someone try with just their clothes on a struggle so that kinda made me laugh.

After it was all over, myself and the team where very bummed, but for me I was surprised that I wasn’t more upset. I don’t know how to explain it, I guess after the day I had and how much I enjoyed riding again and knowing I had the speed to podium and possibly win it didn’t really bother me. There’s no better feeling then getting on my race bike being a dirt tracker or road racer and just being able to ride and just enjoy myself.
The next day I had to be at the Speedway bright and early to take an XR750 to Tommy Hayden that had a number 46 on it. I had it packed in my van with my two Honda 450s. Even though the guy that bought it probably has no idea who JD Beach is, it’s still pretty cool to know firsthand you had a pretty big part in getting him his bike.

Now that I’m home we actually have a weekend off that most likely will be filled with some sort of riding. Next up we have the Springfield Short Track and Mile then I finally get to throw my leg over my R6 again in New Jersey. I can’t wait to get on that thing with this new found enjoyment and pop some wheelies and work with my crew again. I hope everyone has a great weekend and an even better Labor Day.