More than two decades after he first started racing, Jordan Harris is only now fully demonstrating exactly what he’s capable of as a competitor. The Pennsylvania coal miner kicked off his amateur career in motocross at the age of six and transitioned to flat track a few years later. While he enjoyed significant success before turning pro -- winning the 2007 District 6 Open Amateur Championship and scoring top results in AMA All Star Series Pro Singles -- it took some time for Harris to make an impression at the Progressive American Flat Track level. A family man competing against packs of hungry young teens in the Parts Unlimited AFT Singles class, Harris stepped up his game significantly in 2017 with a season highlighted by a seventh-place finish at the Red Mile. He built on that with three Parts Unlimited AFT Singles top tens in 2018, including a top five the next time around at the Red Mile. But Harris’ biggest breakthrough that year was his dual performance in the new Mission Production Twins class, taking a third and a fifth in the class’ two races. He made the Mission Production Twins championship his primary focus in 2019 and came away with three top tens. He closed out the season on a particularly positive note, collecting a sixth and a seventh in the year’s final four races. After a year away from competition, Harris returned to the Mission Production Twins fray in 2021, highlighted by a sixth-place finish in the Charlotte HM season finale. 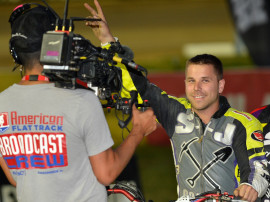