Brandon Kitchen secured his reputation as one of the sport’s brightest up-and-coming stars with his maiden Parts Unlimited AFT Singles victory at the 2020 Indy Mile I. He entered his rookie Progressive American Flat Track season in 2019 just hoping to learn as much as he could. But by the end of the year, the impressive youngster was teaching some lessons of his own. The 2018 D14 Michigan State Champion got stronger and stronger throughout his debut campaign. As the season went on, he increasingly learned the ropes on the big Miles and figured out how to mix it up with a field stacked deep with national-caliber riders. The Michigan native took a significant step forward in 2020, improving from 20th overall to eighth. That progress was built on the strength of a victory in Indy, another podium in Atlanta, and four top fives in all. He was similarly quick in 2021, notching up six more top tens, including a runner-up finish at the New York Short Track II. Kitchen is again representing Vance & Hines and Husqvarna in 2022. 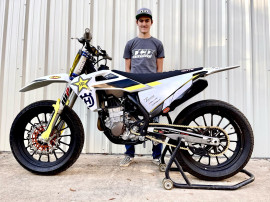 Brandon Kitchen will be piloting a full fleet of Factory supported Husqvarna FC 450’s for the 2021 season.