The son of 2000 Grand National Champion Joe Kopp, the uber-talented Kody Kopp is rapidly turning his impressive lineage into a secondary note rather than his primary claim to fame. The latest in a long line of flat trackers hailing from the Northwest, the Washington native first started riding when he was just three-and-a-half and was racing a few months after that. Following a spectacular amateur career culminating in the 2020 Nicky Hayden AMA Flat Track Horizon Award, Kopp’s ascension to the professional ranks was anticipated in a manner reserved for the sport’s most highly rated prospects, such as reigning Parts Unlimited AFT Singles champion Dallas Daniels. While he showed flashes early in the 2021 season, Kopp proved he was fully deserving of that considerable hype during the second half of his rookie campaign. The young ace battled for the win en route to a runner-up at Port Royal and later backed that performance up with podiums at the Springfield ST and Charlotte HM. The teenager also demonstrated his innate skills while laying claim to ‘save of the year’ honors with a physics-defying near-crash in Peoria. Despite his numerous achievements, the brightest days are still ahead for Kopp, who is almost universally viewed as one sport’s future stars. As the newest member of the Red Bull KTM Factory Racing team, Kopp is viewed as a viable title contender in just his second year as a professional. 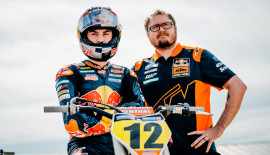 Kody Kopp lived up to the hype with an epic 2022 campaign that proved him worthy of a lifetime of comparisons. 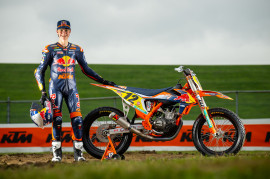 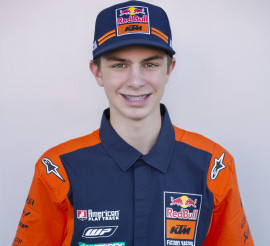 The Red Bull KTM Factory Racing team is pleased to announce the addition of 17-year-old up-and-comer Kody Kopp to its rider lineup.