When Tanner Dean is on, he is on. Every now and again, the “Dean Machine” demonstrates a unique ability to elevate his game to an entirely different stratosphere and far outperform his more typical standard. For example, Dean’s first-career Parts Unlimited AFT Singles top ten came in the form of a win at the Calistoga Half-Mile taken during his rookie Progressive American Flat Track season in 2017. And his next two Main Event finishes better than ninth were victories as well, earned at the New York Short Track and Williams Grove Half-Mile in 2018. Dean added some much needed consistency to his game in 2020, more than doubling his career top tens, including a pair of podiums. While he didn’t add to his wins tally, he did earn his first career championship top ten placement, with a final ranking of 7th in the Parts AFT Singles standings. He added another top-ten championship ranking in 2021, on the strength of nine top tens and a pair of top fives. Dean grew up in Tacoma, Washington, and got his start racing quads. Within a couple years, he graduated to flat track, riding an ex-Brad Baker racebike. He rose up through the amateur ranks, eventually claiming the 2014 AMA Grand National Championship in the 85 DTX class. After that, he raced primarily in the Northwest and maintained a relatively low profile, setting the stage for his shocking Progressive American Flat Track win at Calistoga in ‘17 and all that’s followed since. 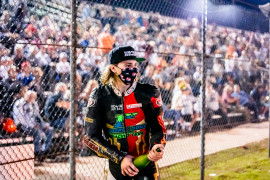 The 1st Impressions Race Team is returning to the Progressive AFT series for 2021 and will field a two-rider team in the AFT Singles Class. 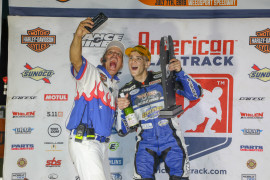