he hugely popular JD Beach made his return to American Flat Track racing in a big way in 2019, scoring the first two victories of his AFT Twins career while juggling a full-time MotoAmerica Superbike career. Beach was similarly successful on pavement, also securing his maiden Superbike race win in ‘19. Beach was an AMA Amateur National Dirt Track champion before trying his hand at roadracing as a Red Bull MotoGP Rookies Cup competitor. Beach won the coveted Rookies Cup in his second attempt and returned to the States the following year to further his career in both roadracing and dirt track. While he established himself as one of the winningest riders in AFT Singles history, Beach enjoyed his greatest success as a roadracer. Over the following decade, he notched up multiple AMA and MotoAmerica national titles before opting to significantly increase his focus on dirt track again ahead of the ‘19 season. Beach’s ability to negotiate left- and righthanders with equal skill was most evident at the TTs, where he twice reigned supreme. His two wins -- the first coming at the Arizona Super TT and the second at the Buffalo Chip TT -- both came in dramatic and improbable come-from-behind fashion. They also marked the first two wins for Estenson Racing’s Yamaha MT-07 DT racebike. 2020 was a more difficult season despite focusing his attention on dirt track. The lack of TTs and development pains with the MT-07 saw Beach earn a best finish of just eighth. Beach made an end-of-the-season MotoAmerica wild card appearance and promptly finished on the podium in the Supersport class at Laguna Seca. Beach is an incredibly versatile rider capable of not only winning MotoAmerica Superbike races and AFTs TTs, but also dominating the Superprestigio Short Track (as he did in 2017), and putting it on the box at a Half-Mile in his first attempt after a full season away (as he did at the ‘17 American Flat Track Finals). Beach is a personable and relatable fan-favorite. He’s also a racer’s racer, who’s looking to chase a checkered flag at every possible opportunity. 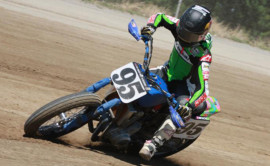 JD Beach talks about his time at the Lima Test & Tune along with running the Peoria short track.. 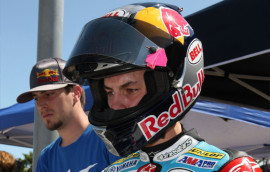 JD Beach talks about pulling double duty at Daytona. Between Daytona Flat Track and the Daytona 200.. he is a busy man.

The AMA Pro Harley-Davidson Insurance Flat Track Championship roared back to life at the Southern Illinois Center Saturday night, as the AMA Pro Racing Stars tackled the indoor dirt oval. While all th...

Just in case there was a doubt in anyone's mind about #1 Henry Wiles' prowess on the venerable Peoria TT, the Monster Energy Kawasaki / Don's Kawasaki backed Michigander dominated round 11 of the AMA...

Springfield, Peoria and Indy Miles Next Up for This Young Rider

One of the most successful and popular 18 year old motorcycle racers in the world, J. D. Beach rides on a variety of different types of disciplines and J.D. will be displaying his considerable talents...